Shoprite Checkers is Africa’s largest food retailer with more than 750 corporate and 250 franchised outlets in 18 countries throughout Africa, South-East Asia and the Indian Ocean Islands. 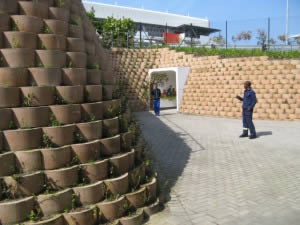 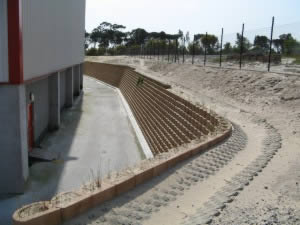 “A substantial portion of the investment in logistics infrastructure earmarked over the next four years will be applied to the upgrading and extension of the Group’s distribution centres in Centurion, Gauteng as well as Cape Town and Durban. In Cape Town approximately 45 000m² of new space is being added, allowing the consolidation of three existing leased centres, reducing costs and inefficiencies. 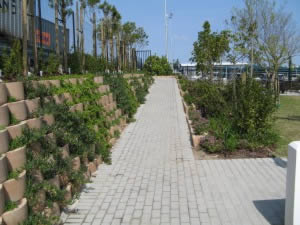 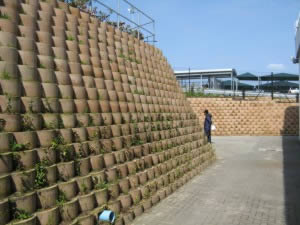 Retaining walls around the facility

In May 2010, KLS Consulting Engineers, with Martin & East as civil subcontractor to Stefanutti Stocks, approached Decorton and Terrafirma to help with the construction of a few level platforms at a sandy site on the corner of Old Paarl and Kruispad, Brackenfell, Cape Town.

Says Karien Visser, engineer with KLS Consulting Engineers: “Due to the slope of the ground and the size of the platforms, natural cut/fill slopes were not possible. The objective was to allow Shoprite Checkers Properties maximum space to enlarge the existing Freshmark Distribution Warehouse and build a new Flowthrough facility.”

Says Paul Kennedy of Terrafirma: “The block is relatively light weight for transport, interlocks on a horizontal as well as vertical level, is reversible to display a smooth round face, smooth straight face or split straight face appearance, is fully plant supportive with an open horizontal surface structure, and has a closed vertical surface structure to prevent progressive erosion of compacted backfill. 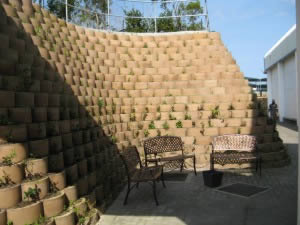 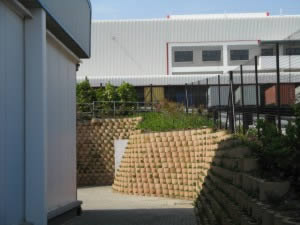 Curves in the design soften the retaining wall

In addition, the wall inclination and curvature can be adapted at will to suit site conditions and blocks can be filled with soil, gravel or concrete as required by the design engineer.”

When asked why KLS chose the Terraforce system, Visser affirmed that it is a very well known product, adding that the retaining wall was a design and supply item, with Fred Laker, Terraforce associated engineer providing the design and Terraforce recommended contractors installing the walls.

By July  2010, 14400 blocks had been installed on site, at an angle of 65°, placed on  concrete foundations, and secured with geo-grid  tie backs or concrete poured into  blocks where needed.  Around the two high lying boundaries of the property, an open storm water channel had to be installed, using erosion control blocks that were re-used from a previous, now redundant, installation. In addition it was essential to install sub-soil drains in the back-fill of the walls at foundation level with free-draining outlets at regular intervals.

To finish off the project and to soften the overall concrete feel, GBI Landscape Consultants specified that the blocks be filled with topsoil and planted.

Says Erwin Bartsch of GBI Landscape consultants: “Even at a 65˚ slope, pockets in the Terraforce were able to be planted – allowing multiple rows of plants to cascade down, playing down the strong vertical element with different textures and colours.”

Artist Catherine de Valence was hired to add an artful touch to the barren walls of a pedestrian tunnel that became necessary to connect two large buildings with one another, without forcing employees to cross a busy internal road.