The term amphitheatre is derived from the Greek language, meaning roughly: viewing from two sides. Open air theatres have been in use for over two thousand years, mostly in ancient Greece and the Roman Empire, with some of them able to seat up to 60 000 spectators.

Planners in those days understood the advantage of superb acoustics in these structures, and consequently today’s urban planners make use of similar amphitheatres when seating and viewing is needed for public sports or entertainment facilities, making them viewing perfect! 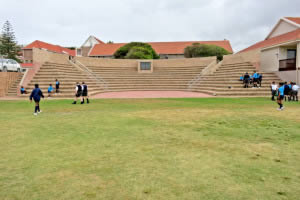 Seating arena for 600 pupils at the Milkwood Primary School 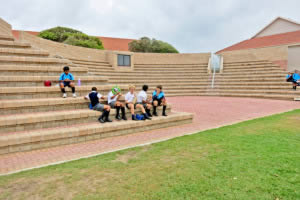 Architect Francois van Zyl was appointed by school principal, Mr van Wyk Dames, to design a seating arena for 600 pupils at the Milkwood Primary School in Mosselbay: “After an initial survey of the site, we decided to excavate a half-round shape from the existing embankment and create a seating arena using Terraforce 4×4 Multi Step blocks, 200mm high hollow blocks and concrete pavers.” 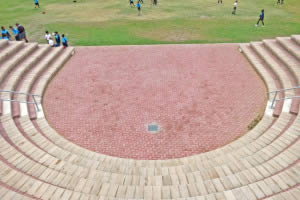 The seating arena as seen from above, a perfect semi-circle

Van Zyl says he had seen other example of these types of seating arrangement on the Terraforce web site: “The 4×4 Multi Step block is perfectly suited for creating a first-rate seating arena, and we closely followed the construction guidelines on the Terraforce web site, only adding extra concrete reinforcement for the stairways. What was a bit of a challenge was creating a perfect semi-circle, with the surveyor having to check for accuracy every few meters.” 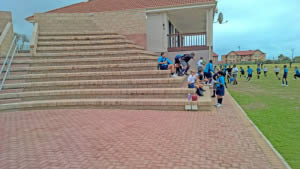 The blocks were supplied by Mobicast, Terraforce licensee in George 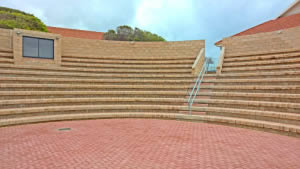 Trees and a domed roof will complete the installation

Construction by Dan-Jon Building Projects started July 2014 and was completed October 2014, with blocks supplied by Mobicast, George. Says van Zyl: “The school is planting trees to round off the appearance of the arena and is planning to order a domed roof, which will turn this facility into a truly multi-functional assembly area.”