Seven years ago, Peter Craven, Terraforce UK, and his business partner Rebecca Lentz, recognized the potential for Terraforce to become a sought-after landscaping and erosion control product for the commercial and residential construction industry in England, Wales, and Scotland. This extends the Terraforce footprint in the UK even further. 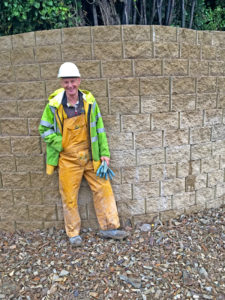 Says Craven: “Terraforce has so many applications and finishes, offering a versatility unmatched by other retaining wall products on the market. By simply turning the block around you can have a different finish to your wall, as well as a rock face option and colour choices.”

After increasingly introducing the L15 block to local contractors and civil engineers, his predictions have not been wrong.

Says Karin Johns, Marketing manager, Terraforce South Africa: “having visited the UK recently to meet up with some Terraforce clients in Wales and England, I was very happy to see how wholeheartedly building contractors have embraced the Terraforce retaining block system. All of them praised the straightforward installation and ability of the block to turn a corner easily.”

Having documented four sites all over the country, Johns says it was a joy to see the L15 blocks installed with a great degree of workmanship: “every site I visited was impeccably installed. Each contractor was happy to recommend Terraforce and said they would be using the blocks again. I could tell that a big effort had been made to get the job just right.” 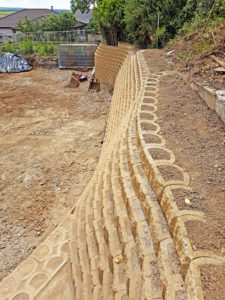 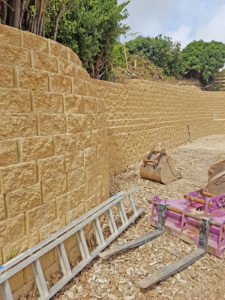 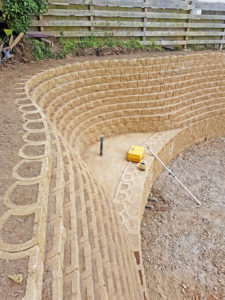 A corner detail that can also function as a planting pocket

The first Terraforce retaining wall Johns visited was in picturesque Cornwall, on a plot in the town of Rock, a holiday resort across the Camel Estuary from the fishing port of Padstow. Installed by Ross Campbell, Ross Campbell Contractors, the 4000-block wall is built with starter bar to the top of the verticall section, with concrete infill, a double block layer and no fines concrete infill for extra reinforcing. The sloped section has a geogrid layer placed every second row of blocks. A perforated 110mm drainpipe drains out any excess water via two discharge points. 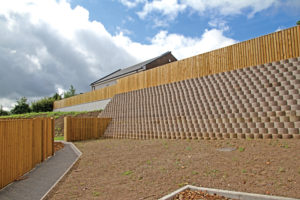 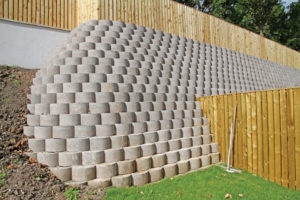 The first 6 courses of the 3 000-block wall were concrete filled, the rest of the wall reinforced with geogrid

Another wall was installed in Holywell, Wales, at a new residential complex, Llwyn Onn. Here the round face finish was chosen to retain a four-meter-high building platform for some of the new homes on site. The 3000-block wall was installed with the first six courses concrete filled and then completed with geogrid reinforcing for the rest. A filter layer in the backfill guides any excess water into a perforated 100 mm drainage pipe that runs along the length of the wall. Jon Bond, Contracts Manager for the developer, Williams Homes (Bala) Ltd, says they will be using the blocks for other projects: “The block is affordable in comparison to other earth retaining solutions, easy to install and transport and in the next season we will be planting some plant cover, which will finish the wall nicely.” 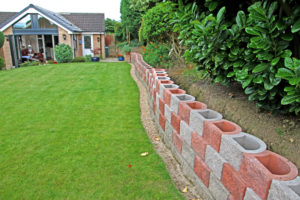 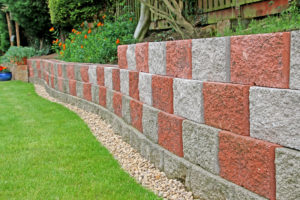 A DIY wall, the owner says he found laying the blocks easy, once a perfectly level bottom row was established

The next wall Johns visited turned out to be a perfect showcase for a DIY retaining wall. Situated in Sheffield, the small retaining wall stands out with a creative pattern of grey and red rock face L15 blocks. Martyn Symonds, who laid the blocks with the help of a family member say he loved the versatility of the blocks: “I went onto the Terraforce web site and all the information for installation was easy to find. I then played around with the different finishes, setting up a small “test wall” initially. The fact that the blocks can be laid without mortar is what attracted me to the system, I knew I could do this myself without too many tools!”

Symonds eventually settled on an alternating colour pattern with the rock face finish. He first dug a trench for the foundation that was filled with 25-40 mm compacted aggregate, about 200-250mm deep. Says Symonds: “Once the first layer of blocks was laid, perfectly level, it was surprisingly easy to finish the wall.  Each block is set back about 2 cm and for backfill I used pea shingle (5-10mm pebbles). I would definitely do this again!” 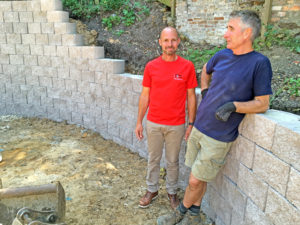 I would absolutely use the blocks again, they turn a corner easily and are fast and easy to install 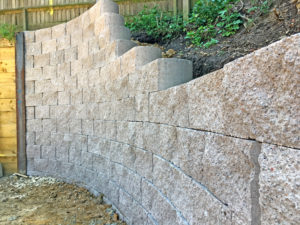 The wall reaches 2.4 m at its highest point, with a double layer of blocks for the first six courses

The last retaining wall took Johns to the village Brill, an hour outside London. Here Scott Morton, Landscaping & Agricultural Services Ltd, introduced the blocks to his friend Derek Turner, The Green Company, who needed an affordable retaining wall solution for an exposed cut slope in the garden of a home he was busy renovating. Says Turner: “I would absolutely use the blocks again, they turn a corner easily and are fast and easy to install.”

The wall reaches 2.4 m at its highest point, with a double layer of blocks for the first six courses. Backfill consists of self-compacting backfill of 20mm shingle. All blocks are concrete filled in this instance.