October 2011 Murray & Roberts Western Cape, an operating division of Murray & Roberts Construction, was awarded a R193-million contract to construct the R300-million Willowbridge Place office development. The new development is located on the corner of Old Oak Road and Carl Cronje Drive, Tyger Valley in the northern suburbs of Cape Town. 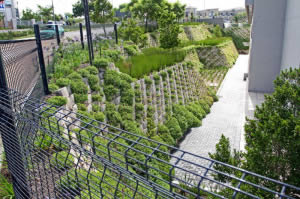 The walls create a pleasant green belt around the building 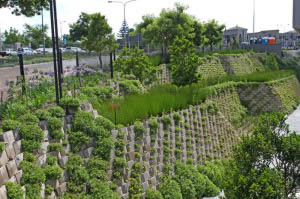 As building commenced, the planning and construction of this prominent building was met with a number of challenges. Says Gerald Kriedemann, the company’s senior contracts manager: “The site layout predetermined limited space around the perimeter of the site, which, added to the proposed strip of permeable paving right around the building, meant the footprint of the entire structure taking up 90% of the site area. As a result, the steep embankments on three sides of the building prohibited the original plan to have gently landscaped slopes below the busy Tygervalley road.” 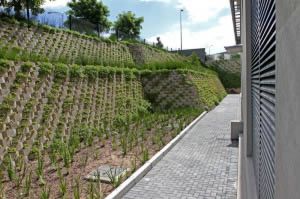 Terraced Decorwall retaining walls that reach up to 7m high 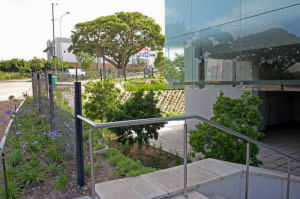 The walls run along three sides of the building

Neill Zaaiman, civils contractor on site, called in retaining wall specialists, Decorton Retaining Systems, to propose a cost effective solution.  Based on a design by Fred Laker, Terraforce recommended engineer, a terraced retaining wall design – using the new Decorwall block – with walls of up to 7m high, was accepted by the client.

The walls are built on a concrete foundation at an inclination of 65 degrees. The close proximity of a busy road made it necessary to beef up the installation with reinforced concrete infill inside the blocks and geogrid layers in the backfill at certain intervals. In this fashion, the block facing and the backfill material form a combined force to resist overturning momentum. As Excessive groundwater was unearthed during excavation, a substantial drainage system was installed behind the block layer to keep the installation stable over time.

Says SP van Blerk, of Decorton Retaining Systems: “We managed to successfully excavate the backfill as well as install 10 500 Decorwall blocks within a tight timeframe of two months. The client is very happy with the end result and with landscaping complete; the walls create a pleasant green belt around the building.”