The concept of fibre-reinforced soil and stackable blocks is not a new one, and can be traced back to the ancient Megalitian cultures that lived in Europe, the Middle East, Central America and Asia.  Initially, about 12,000 years ago, large, stacked boulders were used, until willow or bamboo baskets filled with rocks were discovered to achieve the same result.

Another method was the use of clay, mixed with straw that was used to build amazing structures, some of which survive today.  Yet, for decades, modern engineers relegated gravity block walls to residential backyard landscaping in favor of cantilevered, or steel-anchored, concrete retaining walls. 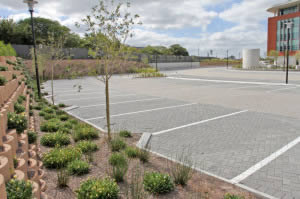 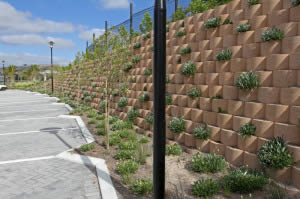 The knowledge of earth retaining with reinforcement was re-discovered in 1969 by Henri Vidal while building sandcastles on a beach. Having interlaced dry sand with pine needles to build small, vertical sand walls, not only was he surprised that the castle kept its shape under loading, its high strength captured his imagination. This ignited a renewed interest in the composite earth retaining wall industry and although there were few early supporters, the technology eventually caught on, ushering in a new age of geosynthetic stabilized slopes faced with segmental retaining walls (SRWs).

Of course, not everyone embraced this methodology. Regulated environments were slow to incorporate SRW processes into their specifications. Nevertheless, SRW systems continued to grow both in volume and scope of application and are now the leading type of earth retention system used in urban infrastructures worldwide. 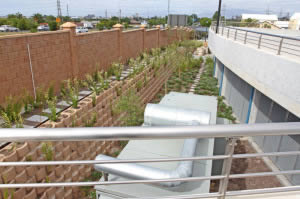 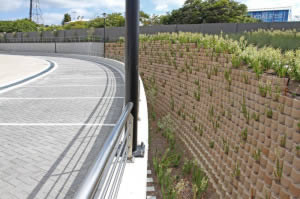 Terraforce, an early adopter of this technology in South Africa, has been active in the industry over 30 years, and has suppliers of its SRW products all over the world. The blocks have become very popular for sustainable development of urban infrastructure, where the goal is to protect undeveloped land and preserve habitats by channeling development to urban areas with existing infrastructure.

The use of SRW units facilitates this, as they are modular and relatively small, so are well-suited for use on small and irregularly shaped lots. This reduces large material and equipment staging areas and fewer requirements of large pieces of equipment when developing cut and fill lots in urban areas.

The blocks can also be used to conserve existing natural areas on the project site by maximizing the amount of open space relative to the development footprint. They also maximize site usage and thereby reduce the total percentage of land area needed for development. Last but not least, SRWs support vegetative growth, which provides improved storm water quality and better erosion control. 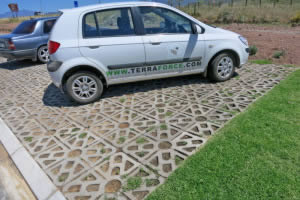 It is easy to see the advantages SRWs and permeable pavers over solid concrete walls and impervious pavements, in terms of sustainability, but also in terms of site aesthetics and ecology.

When the City of Cape Town planned a new head office for the Western Cape Electricity Department, plans included an underground and large above-ground parking lot, necessitating cut and fill slopes that needed stabilisation. To conserve space, as well as a green and aesthetically pleasing solution, Terraforce blocks were specified by NWE Consulting Engineers. Haw & Inglis Civil Engineering were awarded the tender, and Greymo Construction installed the walls, which were completed in November 2013.

In Worcester a Nissan dealership was planning extensions to its premises, creating a steep, exposed fill. Pieter Swart form Osiris Civils presented the client with different earth retaining options, who then settled on the Terraforce L13 Standard block. Terracrete pavers were also installed in the customer parking area as an alternative to an impervious surface. 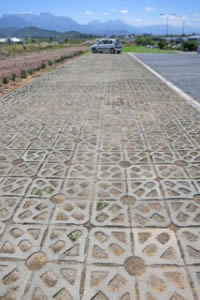 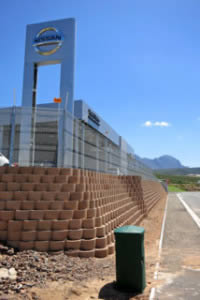 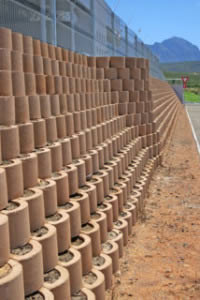 This wall will still be planted

Says Swart: “The client needed more space for a service road and a second car park, so we needed to go up pretty straight with the wall. The Terraforce system can provide this in a cost-effective manner and above all, is plantable and versatile”

Terraforce approved installers, Dassenberg Retaining, installed the wall early November 2013, with 15MPa Concrete as anchors to every second block and 20/19MPa concrete foundations. The client is still planning to landscape the wall, to create a greener, more natural look.