In a bid to create surfaces that are more permeable and allow for a more natural absorption of water and pollutants, permeable interlocking concrete pavers (PICP) are becoming increasingly popular. 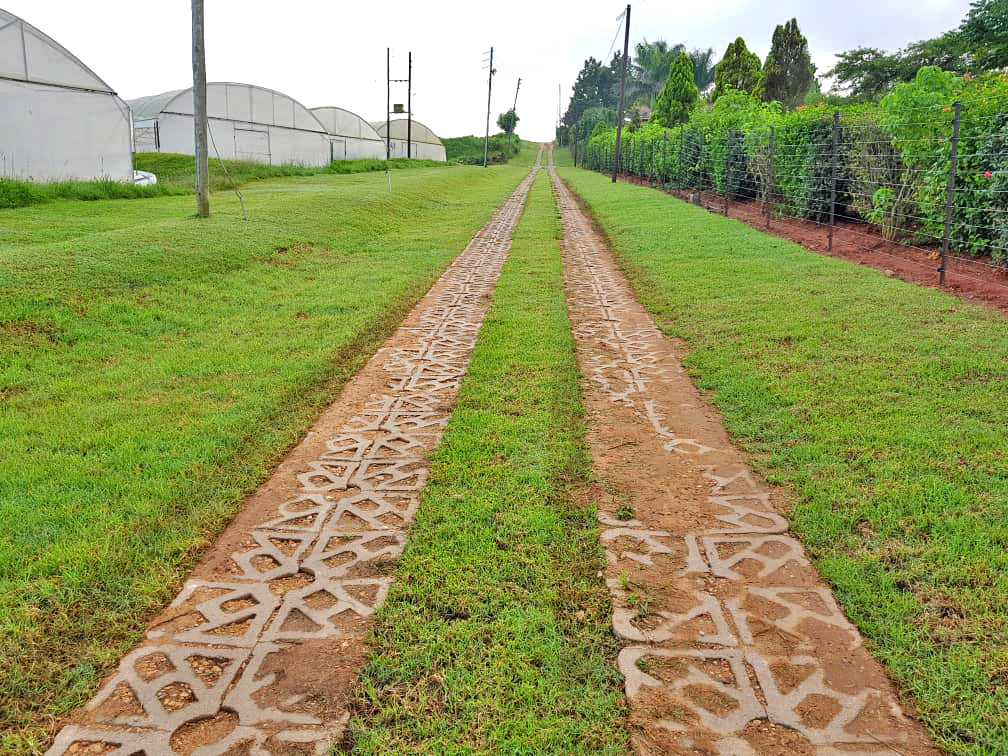 PICPs have interlocking shapes, notched corners, or enlarged joints between PICPs that provide enough permeability to significantly reduce stormwater runoff from roads, parking lots and walkways, provided that the openings are filled with aggregate mixes permeable to water. 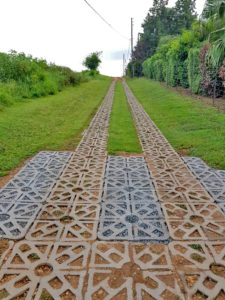 Eight months of about 50 cars per day and still in perfect condition!

Terracrete, a PICP developed by Terraforce in 1999, is ideally suitable for this purpose, as it is a paving block with larger openings (40% open), compared to paving blocks with widened joints (15% open). Says Rust: “The bigger openings allow for coarse infill to be used which means better infiltration and easier maintenance. In addition, something that is often neglected, this allows tree roots to breathe, to absorb water and nutrients that get washed off the paved areas.”

Because they are designed with enough strength and adequate stiffness, Terracrete pavers are capable of accommodating (with suitable sub-base construction) vehicular traffic, making them suitable for the paving of grassed roads and parking areas.

Says Rust: “from an aesthetic point of view, they are very versatile. A grass driveway, a rustic gravel driveway, or an attractive pattern of Terracrete pavers can add the finishing touch to a custom home looking to stand out. With a grass finish, they can add a park-like or pastoral feel to areas normally needing hard paving.”

In some African countries the construction industry is also starting to respond to an increased need to prevent the loss of topsoil and improve water absorption in urban or rural settings, especially considering a predicted drier future across the continent.

In Eswatini, Michael Toepfer, EFS Construction, Terraforce Licensed Manufacturer, wanted to showcase and test the effectiveness of Terracrete permeable hard lawn pavers for the above purposes by installing a test strip on a rural road on his and a neighbour’s property. 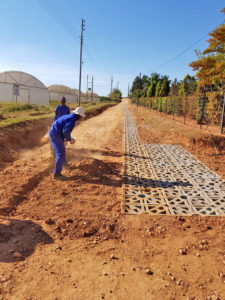 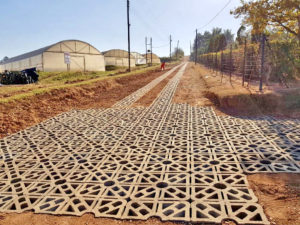 Says Toepfer: “The blocks (25 Mpa concrete mix, machine made) were installed June 2019 – in situ – as strips the width of car tires, with picks and shovels and some local labour. A little river sand was put down first to level out the surface before the block were laid into the earth in an attractive circular pattern. Finally, the blocks were filled with loose stones found on site, to maintain permeability over time.

In one place  – where a driveway joins the road – the strip was extended over the entire width of the road – 7m long and 4.2m wide, with additional widening on the far side, to add extra stability and access and also to provide space for cars needing to pass each other.”

Toepfer completed and progressed the strips in stages over the next few months, testing how each stage would cope with regular traffic of approximately 50 vehicles per day, ranging from regular passenger cars to tractors, front end loaders and pick-up trucks weighing no more than a total weight of 12 tons. 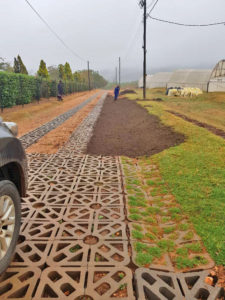 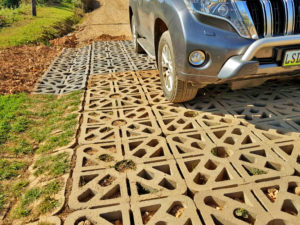 Runoff channel with the Terracrete blocks, one section grassed, one not – for comparison

In August 2019 he added some shaping and planting to the wider section of the road: “the goal was to mimic how nature would deal with stormwater runoff, guiding the water into the grassed areas, while the blocks provide the erosion control required. On the outer side of the fully paved section, I added a simple runoff channel with the Terracrete blocks, one section composted, then grassed, with a grass verge above, and one with the blocks filled with in situ stones and rock riprap above. Finally, I progressively added additional grass verges to either sides of the strips with compost and grass. In in March 2020, the strips and any wider sections added for extra stability were fully surrounded by kikuyu grass.” 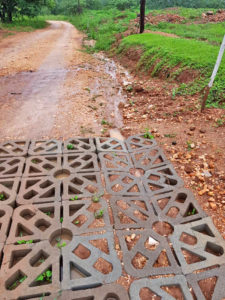 After heavy rainfall in December the rest of the road was eroded, while the test section was still perfectly stable 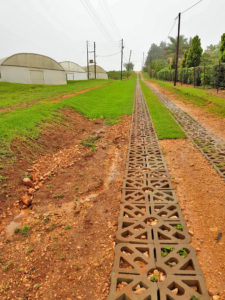 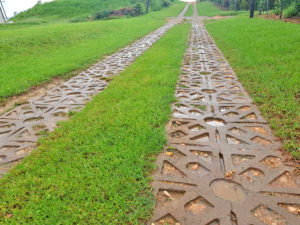 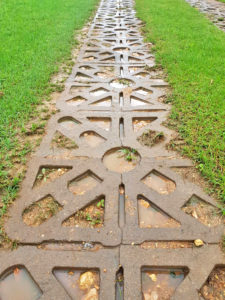 Water seeping through the large openings of the blocks

Toepfer is happy to report that over 10 month the test strip has performed extremely well: “After heavy rainfall (15 mm per hour) the rest of the road was heavily eroded and washed out, while the test section was still in perfect nick. The section with the grass verges performs the best, in my opinion, as they really absorb any excess water that in not able to pass through the blocks fast enough during very heavy rains. 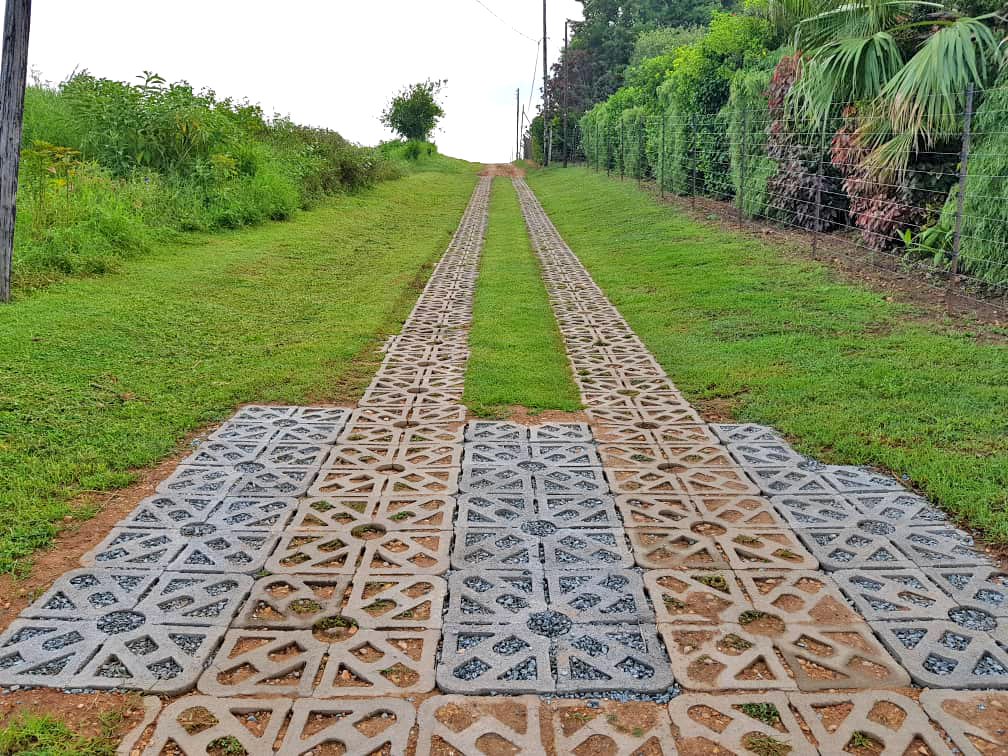 Eight months later and the road is in perfect condition with no cracks in the blocks! 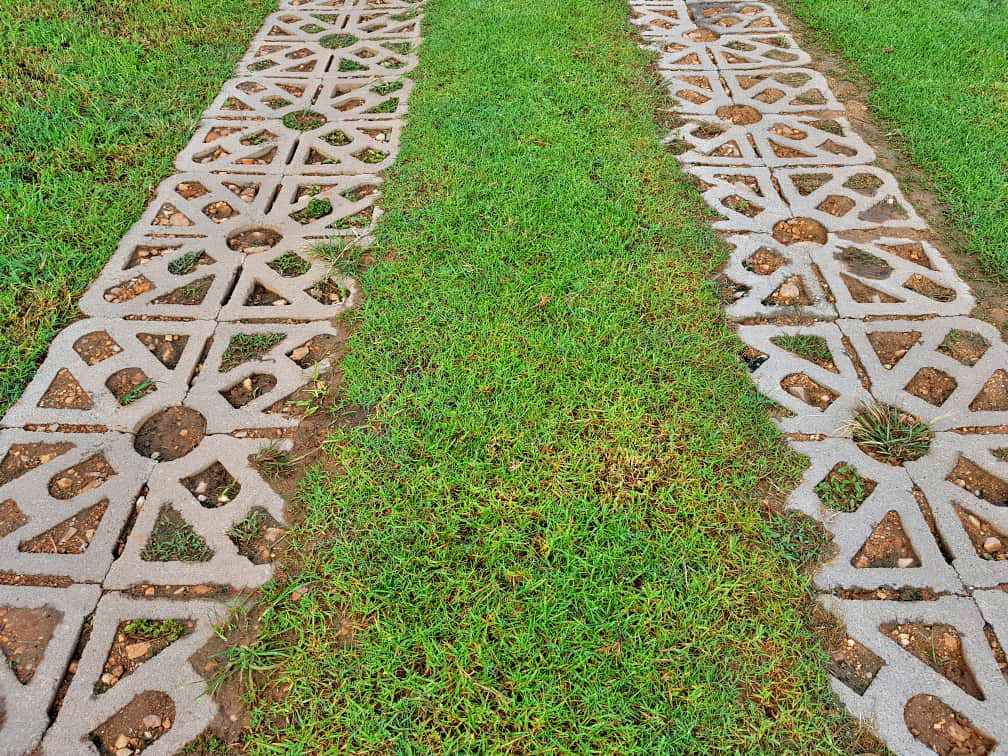 Close-up view of the Terracrete blocks

Also, over that time, not a single block cracked, and even if it did, it is easy to replace blocks as they break. I would be confident enough to give such a road design a 10-year guarantee.

Over in South Africa, some municipalities have also started employing more ‘green’ methods of erosion and stormwater management. In 2015 the Roads and Stormwater Department of the Mossel Bay Municipality, after intense consultations with local residents, set out to make a particularly challenging section of gravel road safe to drive over for passenger vehicles and garbage removal trucks. The section of road, with an incline of up to 17% was particularly difficult to negotiate, even after small rainfall events.

Says Eitner: “Thanks to large holes and a unique interlock the blocks are fully permeable and plantable, which adds to their ability to fully integrate with any environment they are introduced to. The roots of the plants anchor the blocks and help to strengthen them, especially against floods. The holes also allow worms and bugs to pass through the block without sterilizing (smothering) the area. 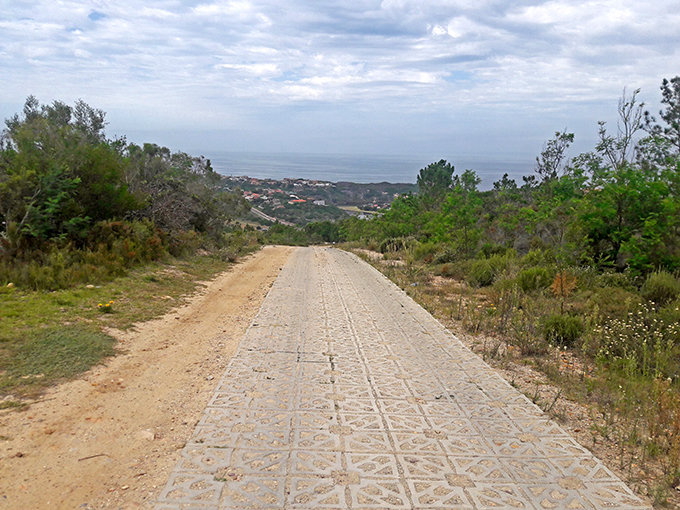 “Another beneficial aspect of the units is their size. The blocks are larger, wider and thicker than normal paving, i.e. firmer and can spread the load better. Added to this, maintenance of the installations is easy, as the blocks provide a stable platform for the mowing of the grass if needed, and if the block strength is increased to 30 Mpa then it works for low volume roads, as was implemented at Stasiekop Weg Road with approx. 17% gradient.”

Installation proved relatively simple. Initially the damaged section of road was graded to a uniform profile, with the required cross fall into the side drainage channels. Next a 2.8m wide by 100mm deep strip was cut into the length of the road with a grader. This in situ bed was compacted with a 10-ton vibrating roller – using added water where necessary – to create a uniform, smooth working surface, compacted to 92% MOD AASHTO. Then the Terracrete units were laid on the prepared surface bed, and, for extra lateral stability, wired together with 3.1mm galvanised fencing wire, as directed by Eitner.

At specified intervals, 900 mm long galvanised Y-standards were driven into the ground and connected to the wiring of the blocks. Finally, the block voids were filled with 2% cement stabilised soil from the stockpile, while the voids with the 900mm anchors were filled with concrete. 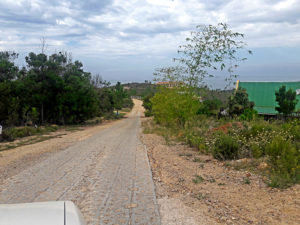 Five years later and the road is still in perfect condition 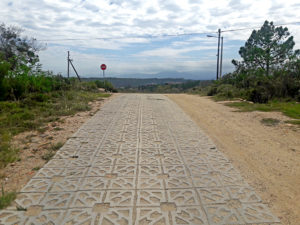 The residents using the road are extremely happy!

The road has been in extensive use for the past 5 years to the entire satisfaction of the Municipality and the local Ratepayers Association. Says Val Marsh, Chairperson, Great Brak Heights: “The residents using this road are as upbeat as Dorothy in the Wizard of Oz, as she skipped along the yellow brick road! Our heartfelt thanks to the municipality, for not only listening to and paying attention to our concerns, but for also acting on them and finally finding a solution. Continuing with the movie theme and addressing the municipal officials and employees – May the Force be with you.”

Browse this gallery for case studies in Namibia, Eswatini and South Africa: