Located on the NW Re-claim area of the Geraldton Fisherman’s Wharf, the operation will offer wash-down, sand blast and private shed services, fenced with a security system so that boat owners can store and retrieve their vessels in a secure environment. 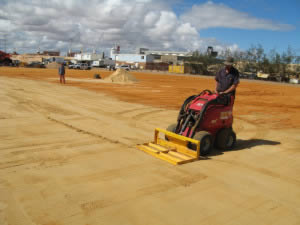 A sand sub-base of gritty sand and rubble 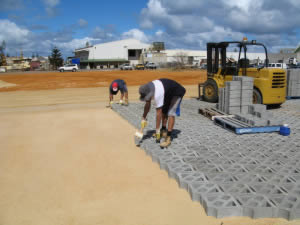 The blocks are relatively easy to install

am Nejad of Structerre Consulting Chartered Engineers instantly saw the opportunity to apply a new eco-friendly drive-over eco-paving block, Terracrete, which had been introduced to the Western Australian market from South Africa a few months earlier. Manufactured by Geraldton Blockmakers under license from Terraforce, the South African based developer of this interlocking, hollow core concrete paving system, the product offered Nejad the desired cost effectiveness, ease of installation and environmental compatibility. 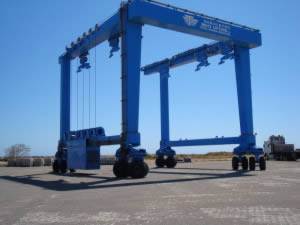 The blocks can take the weight of a boat-lifter weighing 100 tons – capable of lifting 200 ton boats with a beam of 10.2m 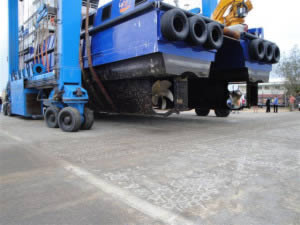 40 MPa concrete mix with 5kg of EPC BarChip “Macro” was added to the mix, to stop the blocks from fragmenting

In addition, he felt that the block would be able – according to its design – to handle the pressure from a 300 ton boat lifter moving at about 5km per hour. Says Nejad: “The advantage of ending up with a permeable eco-friendly surface was the prime motivator for specifying Terracrete apart from the positive cost implications.”

After conducting considerable research and experiments to achieve a concrete mix of superior strength for the manufacture of the blocks, Nejad, together with Len Foster of Geraldton Blockmakers, decided on a 40 MPa concrete mix with 5kg of EPC BarChip “Macro” (42mm long by 1mm in diameter) added per cubic meter mix, to stop the blocks from fragmenting when the wheels of trucks and lifter turn. 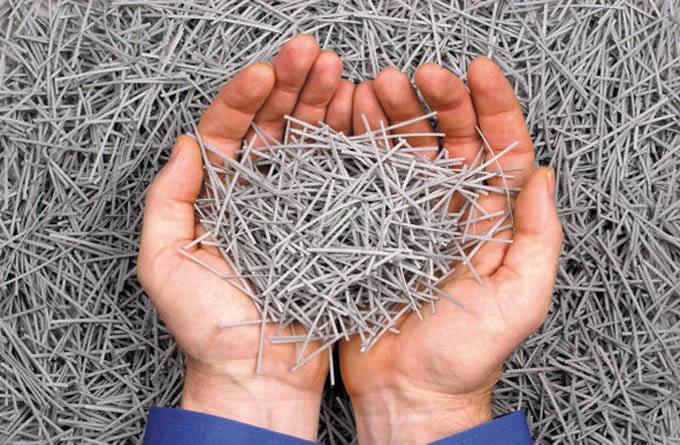 The fibres are manufactured by Elasto Plastic Concrete (EPC) from minimum 550MPa high tensile strength modified polyolefin plastic, and similar to steel rebar, receive a contoured surface embossing treatment to maximize bond with a cement matrix. The base, polyolefin, is highly resistant to the majority of aggressive agents and will never oxidize when exposed to the conditions which cause steel to rust. BarChip fibres also improve concrete ductility, toughness, crack control, fire resistance and long term durability.

Once it was calculated that the loading exerted by the balloon tires would be about 750Kpa, Nejad set about designing the layer work. He decided that the blocks (100 mm thick) should be underlain with 100mm of compacted sand (greater than 10 blows per 300mm with a Standard Perth Penetrometer -16mm rod, 9 kg weight, 600 mm drop) over a sand sub-base of gritty sand and rubble, compacted to greater than 95% relative dry density. Says Nejad: “No significant pollutants are expected in the open storage area. Small amounts of pollutants will be digested by bacteria, naturally present in the soil. Big spills, should they occur, will be immediately cleaned up by lifting the blocks and sand layer and replacing with fresh sand and blocks.”

Construction commenced in November 2007 and according to Len and Tracey Foster of Blockmakers, their task of delivering the goods was made easier by commissioning their new block press from Profile Concrete Equipment, Cape Town based designer and supplier of top quality construction equipment worldwide. Delivering better compacted, stronger blocks at a faster rate made a noticeably positive contribution to this projects.

The contractor on this project, JD’s Landscaping, was impressed with the ease of laying Terracrete – he managed up to 1000 square meters in 5 Days with 3 workmen and has placed 6000m² so far. The blocks are finally filled with 5 to 7 mm washed granite gravel before final compaction with a rubber pad compactor.

As the project is nearing completion, Nejad is very satisfied with the strength performance of the block: “We tested areas of the paving where the 100 tons boat lifter stood in one place and spun its wheels on the spot. There was no damage to the blocks. Of course in real life it won’t do that but will move slowly and turn gradually – the test showed an extreme example and the blocks are undeniably working as designed. If ordinary blocks had been used, they would have been shattered.”

Other test results of the blocks and cylinders have revealed that during whole block crushing tests the press was able to deliver 190ton pressure which left the blocks unharmed and cylinder strength was an average of 43.7Mpa at 28 days (Equivalent to cubes strength SA). This result was confirmed by testing round, smaller cylinders cut from blocks supplied by Blockmakers.