Brief installation guidelines: When building composite walls of any significant height, it is of crucial importance to consult with an experienced engineer. The law is very strict on these matters, with the NHBRC requirement stating that one can build a wall to a height of 1.2m without consulting an engineer, but as a general rule 1.5m for walls no steeper than 70º is also possible. Any steeper and especially load carrying walls must be designed by a qualified engineer, even if only 1.2m high.

Terracing a steep slope in Canada

The municipality of White Rock, a community close to Vancouver and overlooking the Strait of Georgia, was confronted with an unattractive shot-crete stabilised embankment, very close to its popular beachfront and tourist destination. The Terraforce retaining system opened up the option of a more good-looking solution

Motivated by a strong aspiration for aesthetic perfection that is well defined in Canada, it was decided to do something about the eyesore, and consultants Golder Associates were commissioned to present a proposal. 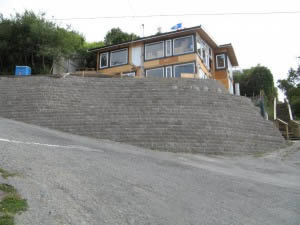 The wall during construction 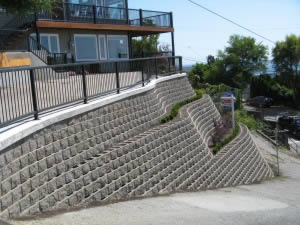 Preliminary site investigations showed that a relatively heavy Concrete Retaining Block with enough versatility to follow the topography of the site, which can be effectively connected to backfill reinforcing geo-grids and which offers an aesthetically pleasing elevation, would be suitable.  A Terraforce L13 rock-face block was considered as the best choice, based on site information provided by Brad Mc Kay of Gaia Contractors, Terraforce prepared a preliminary design. 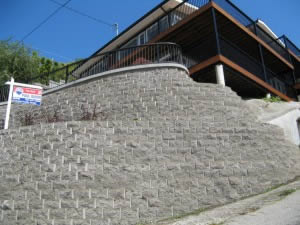 Front view of the the retaining wall 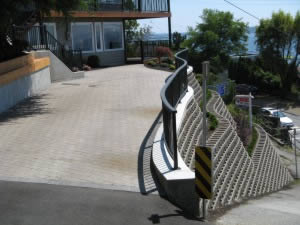 The Terraforce blocks were supplied by Truline Concrete Products based in Courtenay on Vancouver Island.  Construction commenced early in 2010, and was taken to its final height shortly thereafter as shown in the attached photos.  Finishing touches were added during 2011 after the house above the slope was completed, and planting was established. 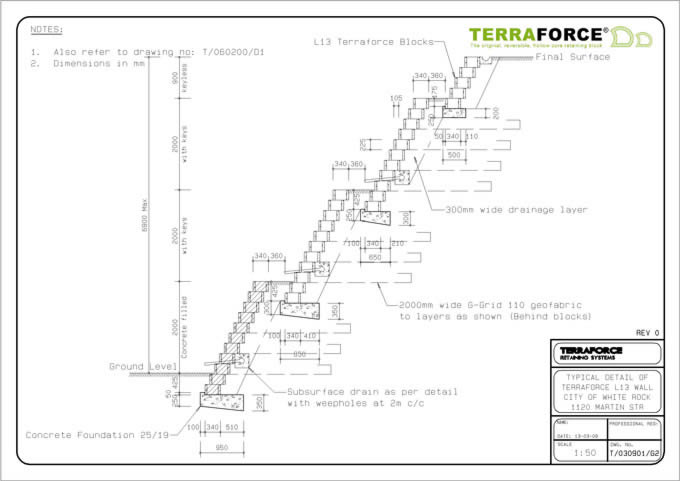