Heavy duty retaining at its best

Cape Recommended Terraforce Local retaining wall system installer, Decorton Retaining Systems, recently found themselves in the position of being the only contractor willing to undertake the installation of a particularly complicated and steep (9m high) retaining wall. Update once the project is completed will follow.

Says Jeremy Leighton, civil engineer at Decorton: “We were faced with an extremely steep site, with a level platform for a new house cut into it. The 9m high cut-face is in clayey ground and the work had to be executed in the wet Cape winter.  Access to the site was only possible via temporary earth ramps and 4 wheel drive loaders, used to bring materials such as 600m³ of selected cement stabilized backfill, concrete, geo-grid, reinforcing steel and 7500 Terraforce L11 blocks in a rock face finish for the outward facing blocks and standard finish for the second layer.” Decorton, together with Fred Laker of Icos Engineers, planned the project as a set of two heavy duty walls with a planting terrace half way up the slope to add visual appeal to the elevation. This design was proposed and accepted by the client. The bottom wall is a double layer of L11 blocks, reinforced with Y16 rebars and concrete up to a height of 3.5m 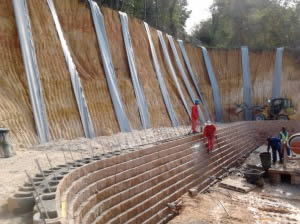 Above this wall is another 4,5m high wall, separated by a terrace to accommodate feature planting, upright and trailing. This wall is of similar design, except that Y12 rebar has been used and the double skin section is only 1.5m high and single layer 3m high. Backfill is reinforced with geo-grid and cement stabilised to the same specification of the lower wall.

An elaborate drainage system has been installed to take care of expected sub-surface water. Horizontal drains are behind the stabilized backfill, draining through the wall face at two meter intervals. Additionally there are vertical drains up and down the cut face every two meters, linking into the horizontal drains.

The walls were completed during the months of May to July 2012, the months that are on record of being among the wettest in Cape Town for many years.  Decorton undoubtedly demonstrated their professional integrity and skilfulness during this undertaking, handing over a site ready for the impending construction of a new home in up-market Bishopscourt.