Brettenwood Estate is a private housing and retirement village, with high, red dunes, close to the sea. There are three big CRB walls at Brettenwood, with this example being the highest.

Says Ben van Schalkwyk, BRW Projects: “The highest wall reaches up to 12,6 m, and is comprised of a double skin of L13 blocks all the way to the top. The concrete foundation is 1200 mm wide, 450 mm thick; and reinforced with Y12 steel bars that protrude into the double layer of the first row of blocks that were set in the wet concrete. The first 9 double layers of blocks were filled with mass concrete. 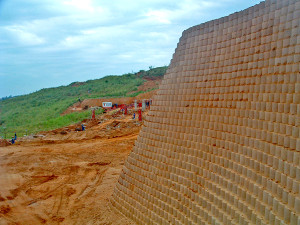 The Terraforce L13 retaining wall reaches up to 12,6 m 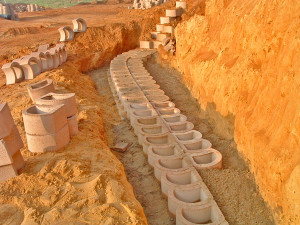 First 9 double layers of blocks were filled with mass concrete

All backfill material consists of stabilised fill (three bags of cement to a cube of soil) and every meter of the height of the wall, a 2m wide layer of Bidim was installed in the backfill.  Finally, behind every line of blocks the backfill was compacted to MOD.AASHTO standard. It is important to mention that for a wall this high, drainage needs to be perfect. In this instance, we installed an agricultural drain behind the foundation, with 19 mm stone wrapped in Bidim, while a V- drain was installed at the top and behind the wall.”

Van Schalkwyk adds that the Terraforce L13 blocks, manufactured by Corobrik Durban, were chosen by Vista Homes due to their extensive experience with these blocks. Vista was the main contractor on site, and had before used Terraforce blocks for large projects.