“Failure” of a retaining wall does not always mean total collapse, but rather implies signs of impending instability and the possibility of future failure. Total collapses, where the wall overturns, slides, topples, or otherwise causes a massive letting loose of the retained earth with resulting damage above and below the wall, are relatively rare . In both instances, there is no alternative but to rebuild and correct the root causes, mostly due to skimping on expenses or sloppy unsupervised workmanship – aka the short-cut brigade. 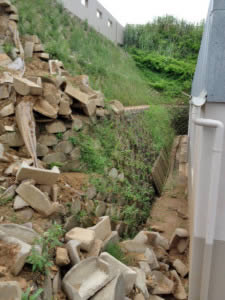 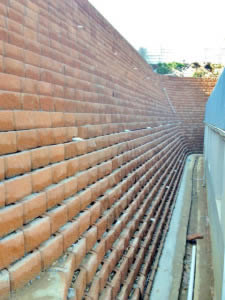 Early 2013, Port Shepstone Precast (PSP), Terraforce licensee on the KZN south coast, were approached by the owner of an industrial property in Marburg who was having difficulty with collapsing retaining walls.

The site has two platforms with a factory building on each. Separating these platforms were retaining walls up to 8 m high, built with an open face block system.

Little is known about the supplier and/or the installer of these blocks, except that some wall sections had to be re-built two or three times after partial collapses.

A site investigation revealed that the original walls were hopelessly under-designed, and it is questionable if a qualified designer was involved at all. 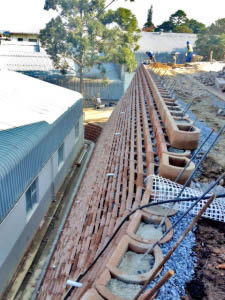 Y16 re-bar inside every block

With this information, Guy Osborne of PSP was able to submit a quotation which was accepted by the owner. Needless to say that the new quote was much higher than the cost of previous installations, but long-lasting solutions generally have a bigger price tag.

Construction started February 2013 and given the complicated site conditions, as well as collapsing embankments during heavy rainstorms, lasted till November of that year.

First the open-face block system had to be removed in sections. Then concrete foundations with protruding Y16 reinforcing bars were cast to support a double layer Terraforce L11 block wall built at 65 degree inclination.

Both rows were filled with concrete, with the front row having a Y16 re-bar inside every block, extending right to the top. Further, a Kaytape S120 geo-grid reinforcing layer was placed, extending into the back-fill, every second row of blocks. The length of the grid varies according to the height of wall at any given point. 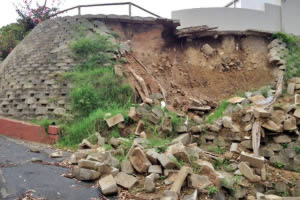 A collapsed section of original wall 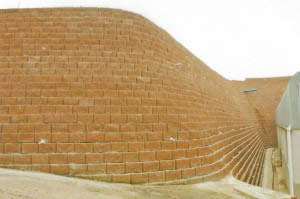 In total 10150 L11 rock-face, tan colour blocks were used for the front-facing, visible layer of blocks, and 8120 grey, standard L11 blocks for the second, concealed layer. The owner was particularly impressed with the visual appearance of the rock-face blocks.