Initiated by the Department of Public Works as custodian of state land, this large retaining wall is located on the West Coast, Pepper Bay harbour area, to stabilize existing eroded embankments in the interest of public safety. 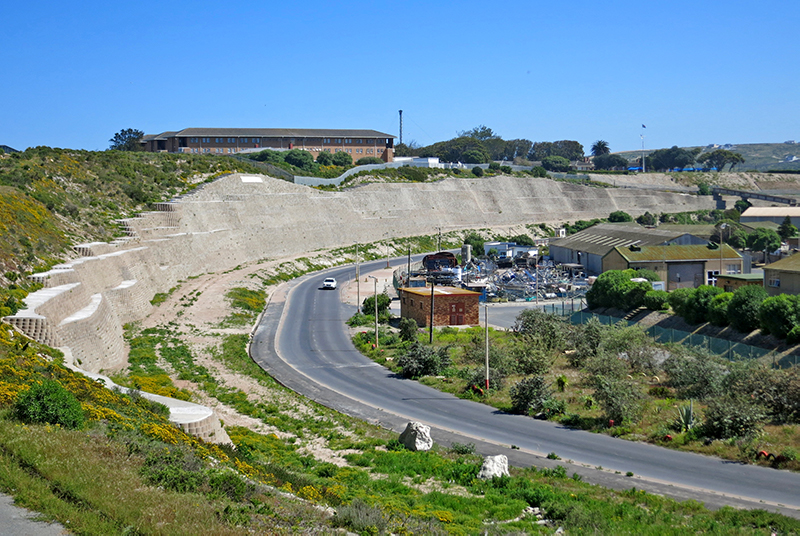 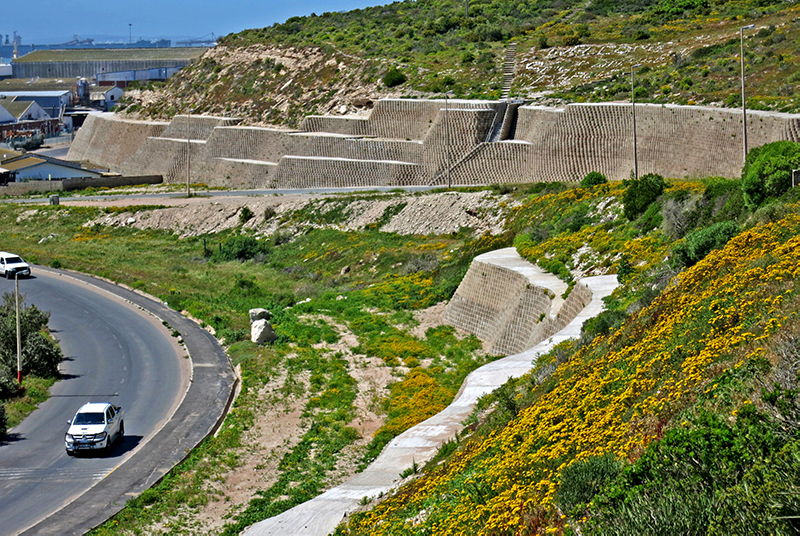 The completed walls blend in with the existing texture and contouring

The embankments consist of multiple layers of sedimentation up to 21m in height and 2.5km in length, where softer material has eroded leaving harder layers of overhanging and unstable rock. The Terraforce retaining wall system was specified by the consulting Engineer, Ulwazi Consulting Engineers, as offering practical, stable, and weather resistant surface protection. 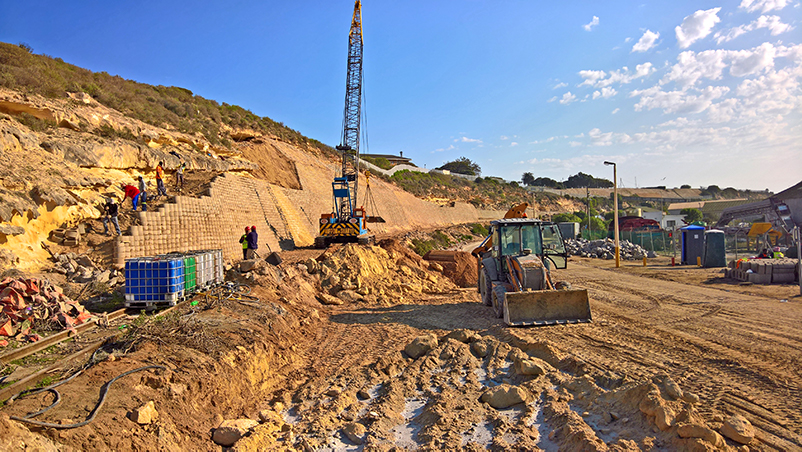 The Terraforce retaining wall under construction

A trusted industry brand for 40 years

Terraforce is a member of the Concrete Manufacturers Association (CMA) in South Africa and adheres to the Canadian and US international Standard Specification for Load Bearing Concrete Masonry Units, following a successful ICBO (now ICC-ES, a leading US nonprofit, limited liability company that does technical evaluations of building products, components, methods, and materials) evaluation in 2002.

The Terraforce earth retaining system was also extensively tested by Hawkins Hawkins & Osborne Consulting Engineers, South Africa in 1992, resulting in a comprehensive design and specification manual and user guide. Composite retaining wall design and construction procedures with Terraforce blocks have been subjected to rigorous laboratory tests. These were conducted on a large-scale test apparatus to evaluate the mechanical performance of, among others, the connection between blocks and grids. In all tests the primary mode of failure was rupture of the geogrid outside the blocks and performance was found be above average based on experience with many systems tested over many years.

Terraforce products also undergo regular MPA testing, locally and overseas. Currently the blocks are undergoing further shear resistance and geogrid connection tests at Curtin University, Perth, Western Australia, guided by Johan Joubert of Wave International, results of which will be made available once tests are completed. 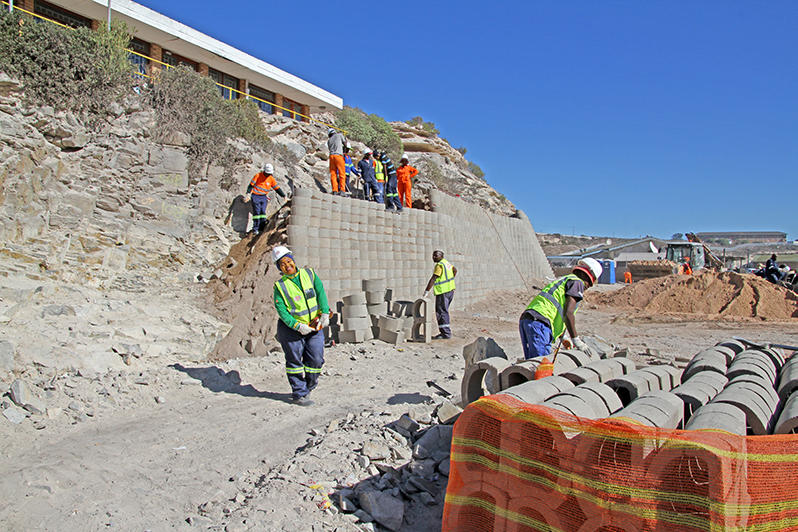 Before block installation could begin, all vegetation and loose material had to be removed to expose the underlying rock face of the embankments. Says Adriano Guerrini, of Guerrini Marine Construction:

“These were swept clean and benched for slip prevention, so the extent of stabilising could then be determined and the angle (generally between 60 and 70 degrees to the horizontal) of the final face slope set out. Using soil-crete (sand: cement mix) the rock face was covered by backfilling in well-compacted layers, with depth of the backfilling being monitored and minimised to follow the natural contours of the exposed face. 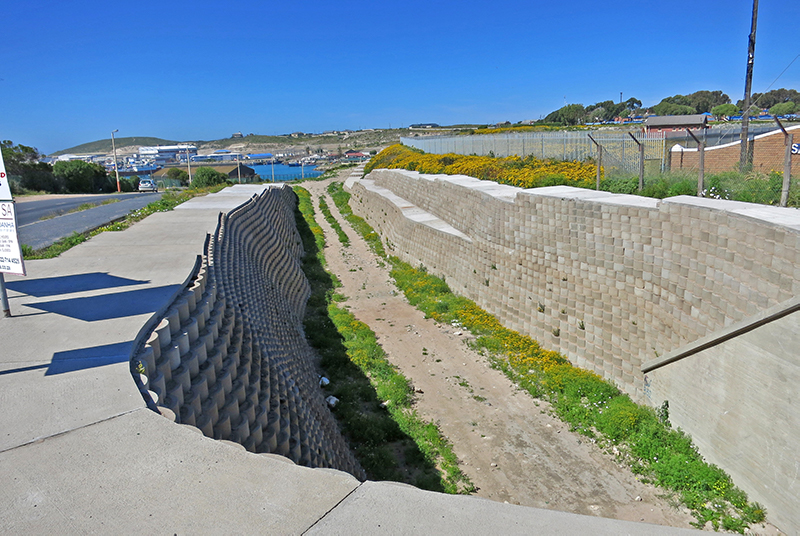 An access route is included in the design, with a walkway at the top 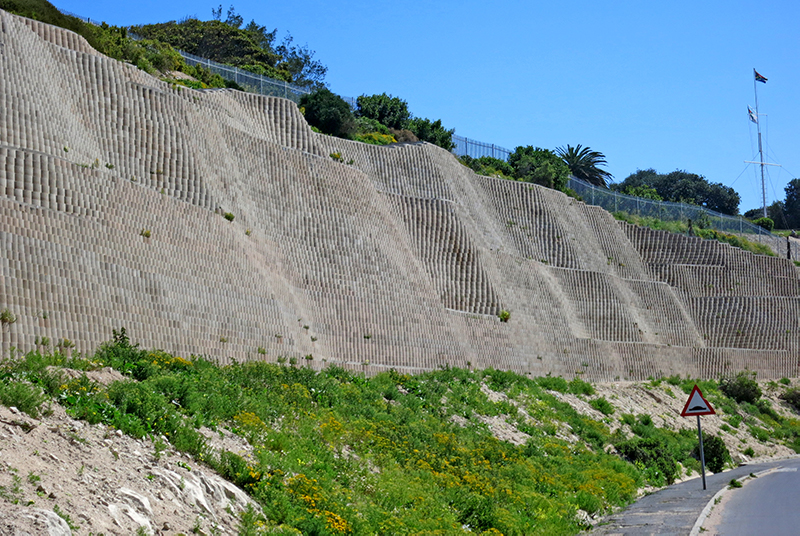 “At the same time the block facings were built up and the blocks filled with soil-crete, stepping back towards the rock face where appropriate, to minimise depth of backfill and reduce the visual impact of a sheer wall. Finally, the tops of the step-backs and the finished level are capped with a concrete slab.” 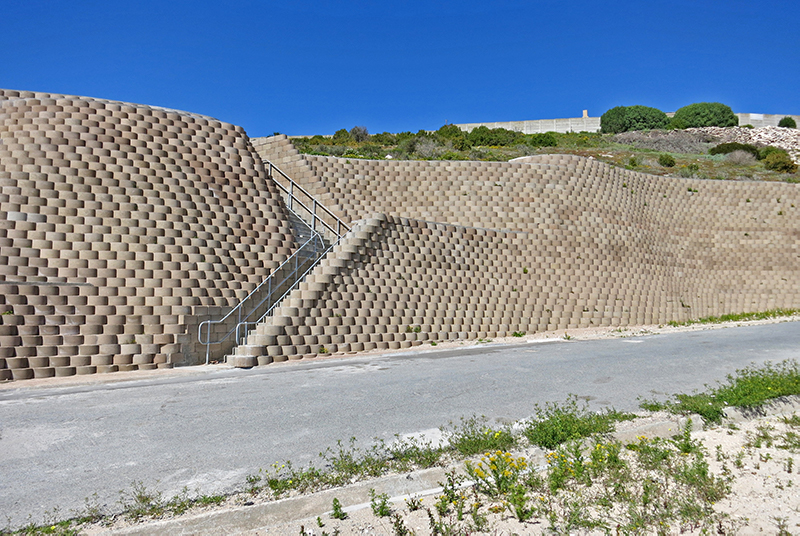 One of the staircases built into the walls

Some of the challenges encountered and successfully managed during installation included the continual navigating and assessing of the steep, 15m high, heavily vegetated terrain with cranes and telescopic handlers. An estimated 180 000 blocks, supplied by Van Dyk Stene, Terraforce manufacturer on the West Coast – with 100m² backfill sand per 1200 blocks (100 m2) – were installed using 5 TLB loaders, a 20 000 litre water truck and 80 labourers, of which 90% are local untrained labour, who underwent onsite training. 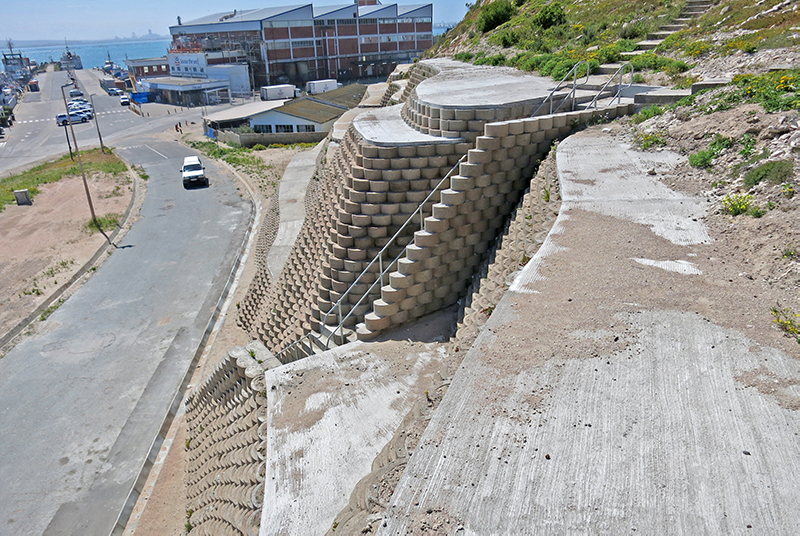 Also, under the auspices of the Expanded Public Works Programme, 25 official learners were given basic construction skill training over a period of approximately three months. On completion in March 2018, indigenous plants were planted by a company specialising in establishing the sensitive vegetation of the West Coast. 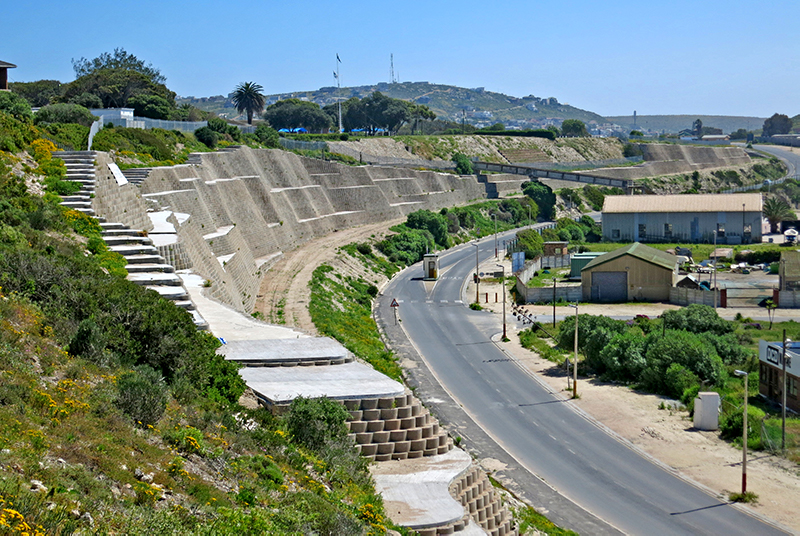 The Terraforce walls continuously follow the contours of the original slope 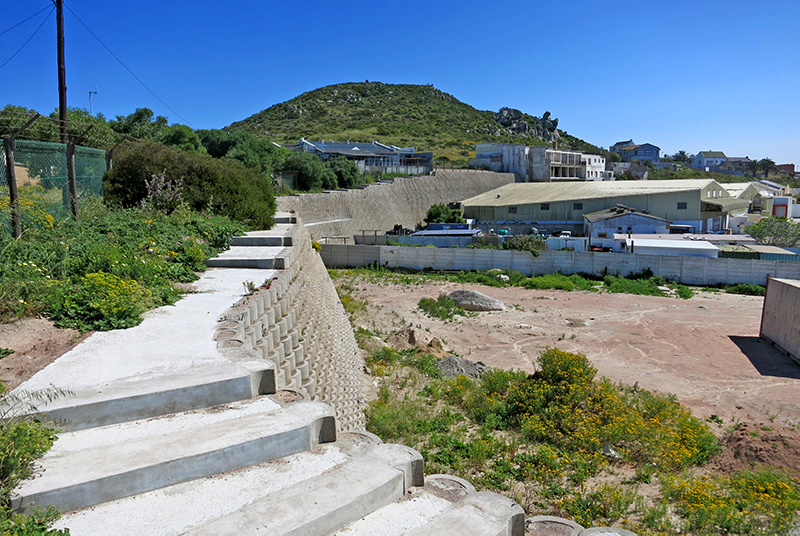