8/2022 – The efficiency of Terracrete permeable pavers

The trend to counter the exponential growth of sealed trafficable surfaces in urban areas started to take root around 1980, possibly even a few years earlier. Research on that subject was conducted by R. Masters and M. Singer 1982, Berlin Waterworks 1984, S.Borgwardt 1993, B. Shackel 1996 and many others. 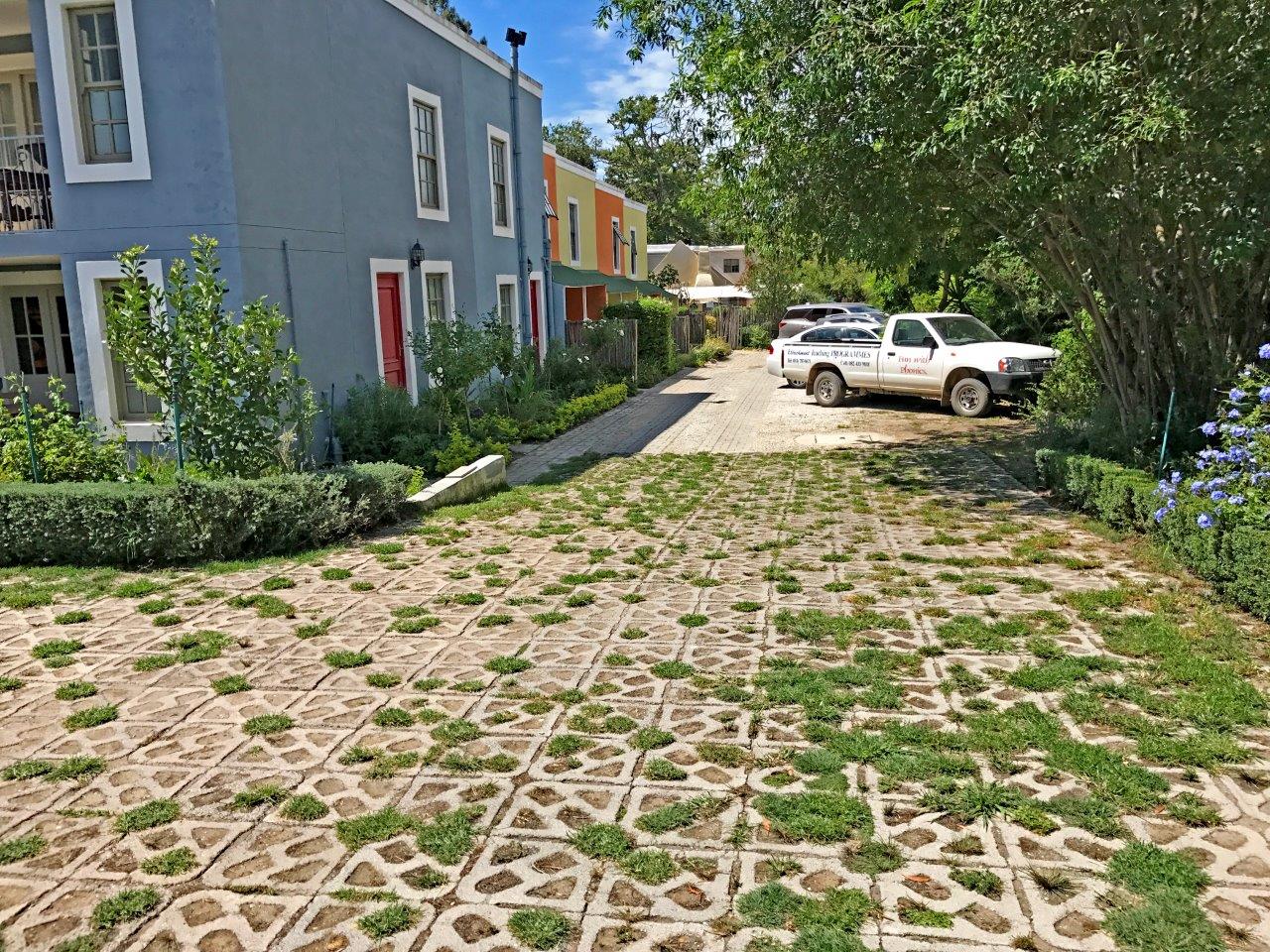 Acceptance of the concept of unsealing existing sealed areas or adapting new eco-friendly concepts that offer many proven advantages was sluggish. Back in 1994 Terraforce obtained the rights to the German Exec concrete paving system which can be installed in several attractive patterns as well as in various permeable patterns. Tested by the Institute of Hydraulic Engineering at Karlsruhe University, Exec Eco-paving is capable of infiltrating 400L (sec/ha). During that same year the system was launched in co-operation with Dave King of Inca Concrete Cape.

Sadly, the venture failed in South Africa as the system was designed to be installed mechanically, whereas hand packing was still the norm here.

Meanwhile, Terraforce developed Terracrete eco-paver in 1998, a larger version of Exec with large internal openings, suitable for installing hard-wearing, permeable eco-surfaces on roadways, parking areas or for mixed use installations such as stormwater detention ponds as well as for general erosion control measures. Terracrete is now widely accepted as a versatile, cost-effective solution to be used in combination with conventional paving systems or as a standalone solution. For more on the block: Terracrete™hard lawn concrete paver – Terraforce

Terracrete was launched in 1999 and received a cool reception in the market. Says Rust: “Even the development of plastic moulds that allowed for production on a small scale with minimal capital outlay did not help much. Finally, during the years 2002 to 2004 specifiers started to accept the concept and sales started to pick up.”

Today Terracrete is available locally in the Western, Eastern and Northern Cape, KwaZulu-Natal and Gauteng and internationally in Swaziland, Namibia, The United Arab Emirates, India and Australia.

Testing the Permeability of Terracrete Pavers 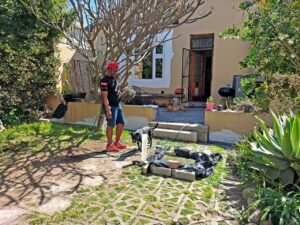 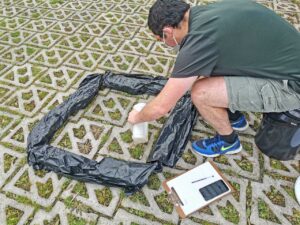 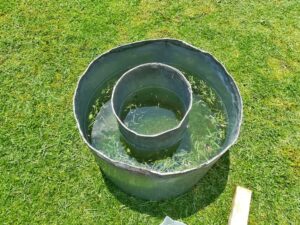 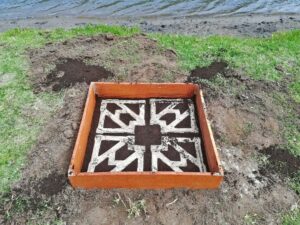 Moor concluded that: “The long-term infiltration rate tends to the natural soil infiltration rate calculated by the double ring infiltrometer test, that Terracrete systems maintain a steady long-term infiltration rate with minimal maintenance required and that these pavements can be aesthetically pleasing by increasing the green land on a property.” The important takeout here is that contractors consider the original soil conditions in their planning, i.e. a clay soil is likely not to be permeable and needs extra drainage measures. 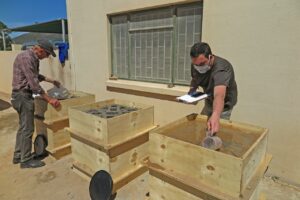 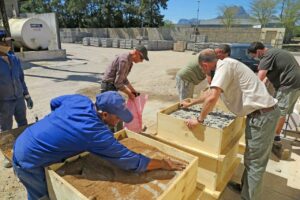 Preparing the testing station for the three types of Terracrete block infill, soil, sand and gravel

Noqayi conclusions echoed Moor’s in that “the infiltration of Terracrete eco pavers is largely dependant on the underlying soil conditions”, which means the design of the sub-layers is crucial in areas where the soil proves less permeable. He also found that vegetation increases infiltration rate through the root system of the plants, especially when the pavers where not filled entirely to the top to leave space for growth of grass or other vegetation. However, Rust adds here that this strategy may not always be acceptable, in which case loose gravel or stone infill is more appropriate, as stated in Moor’s research results.

Permeable Interlocking Concrete Pavers (PICP) or eco-surfaces are now the latest trend, says Rust: “A little belated but at last the market is now willing to look at new directions and ideas in paving practice.” 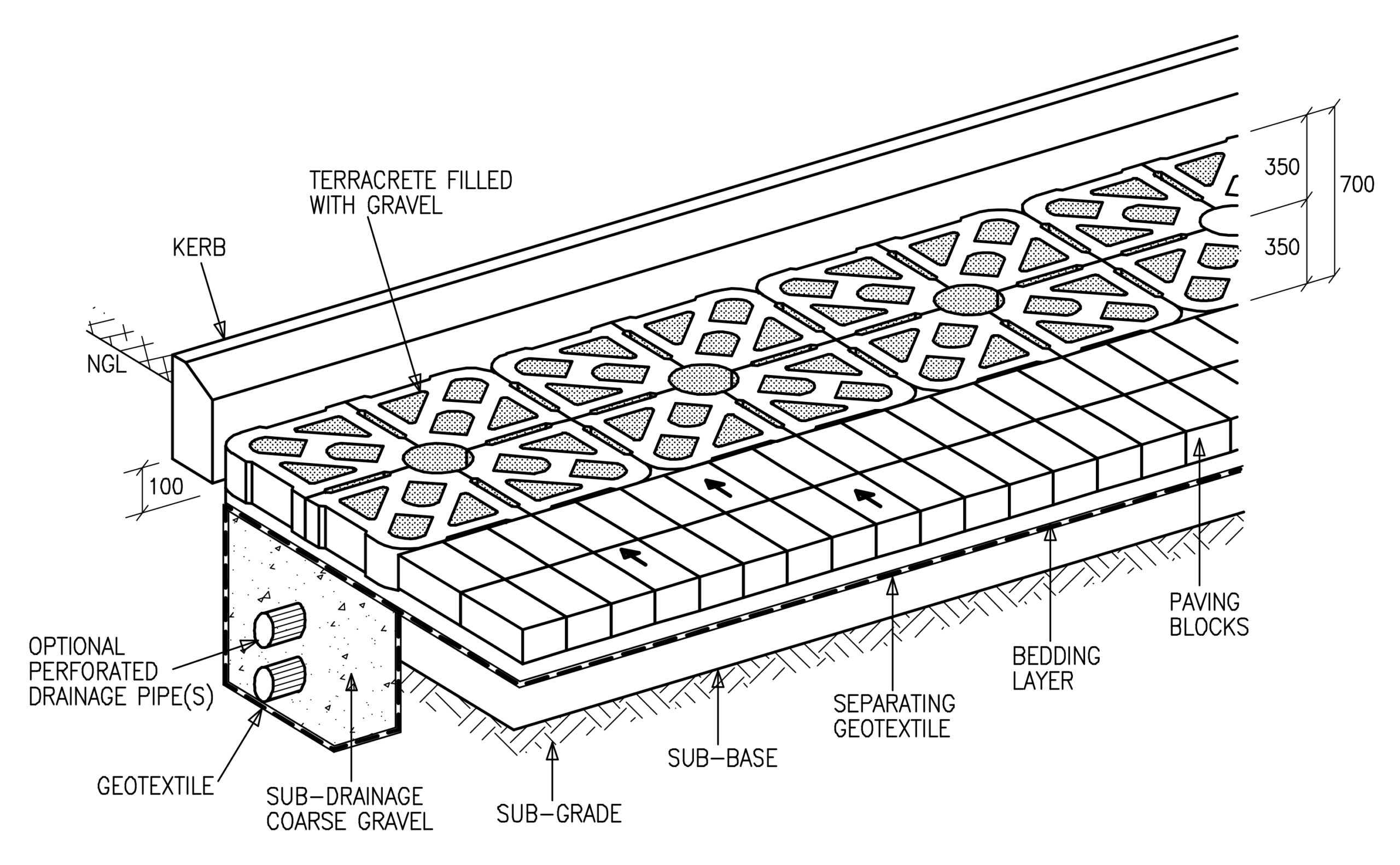 Rust himself describes a new method of creating permeable and efficient drainage/infiltration in existing paved areas or in new areas that are to be paved with asphalt or interlocking clay/concrete pavers: “The incorporation of drainage lines along edges, around perimeters and at predetermined centers across parking/storage areas or roadways makes it possible to up-grade existing ones or enhances drainage/infiltration of new installations. This method can also be applied when new service or irrigation lines must cut across existing parking areas while trees are established at the same time.” 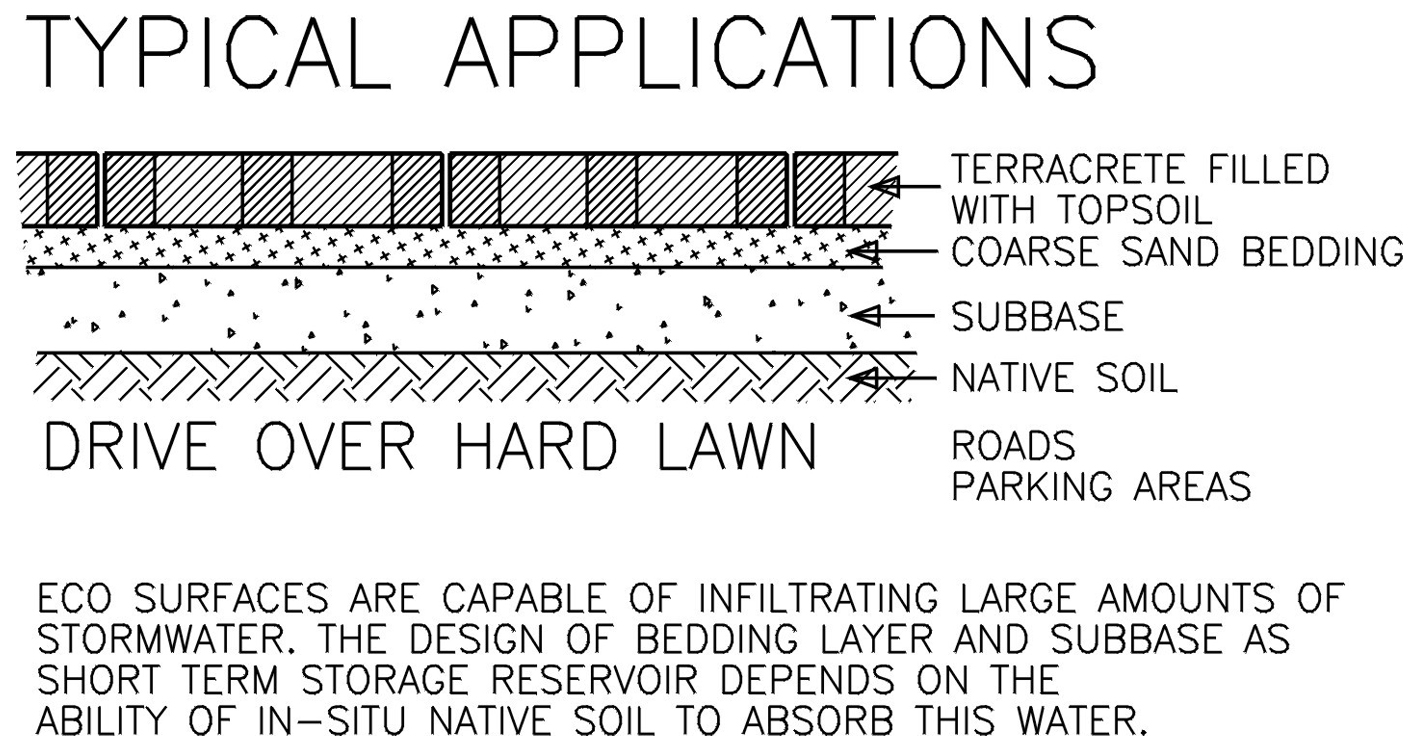 Rust also adds that the Terracrete block is ideally suitable for this purpose as it is a paving block with openings (40% open) compared to paving blocks with widened joints (app. 15% open).  The bigger openings allow for coarse infill to be used which means better infiltration and easier maintenance. In addition, something that is often neglected, this allows tree roots to breathe, to absorb water and nutrients that get washed off the paved areas.

The early research into PICPs

The concept of PICP has been well studied overseas. In 2007, Rust worked together with Dr Sohnke Borgwardt, landscape architect and consulting engineer and leading expert on the subject in Germany, to highlight findings about the method suggested by Rust.

Bearing in mind that infiltration with this method does not occur over the whole area but rather at certain intervals, Sohnkes’ findings about PICP are as follows:

Rust estimates that this method will prove to be more cost-effective and easier to maintain that its alternatives. Rust also adds that Terraforce, together with its local and international licensees, continues to be committed to further developing the product and its applications, closely liaising with Industry experts.

What are the benefits of Eco-pavers? 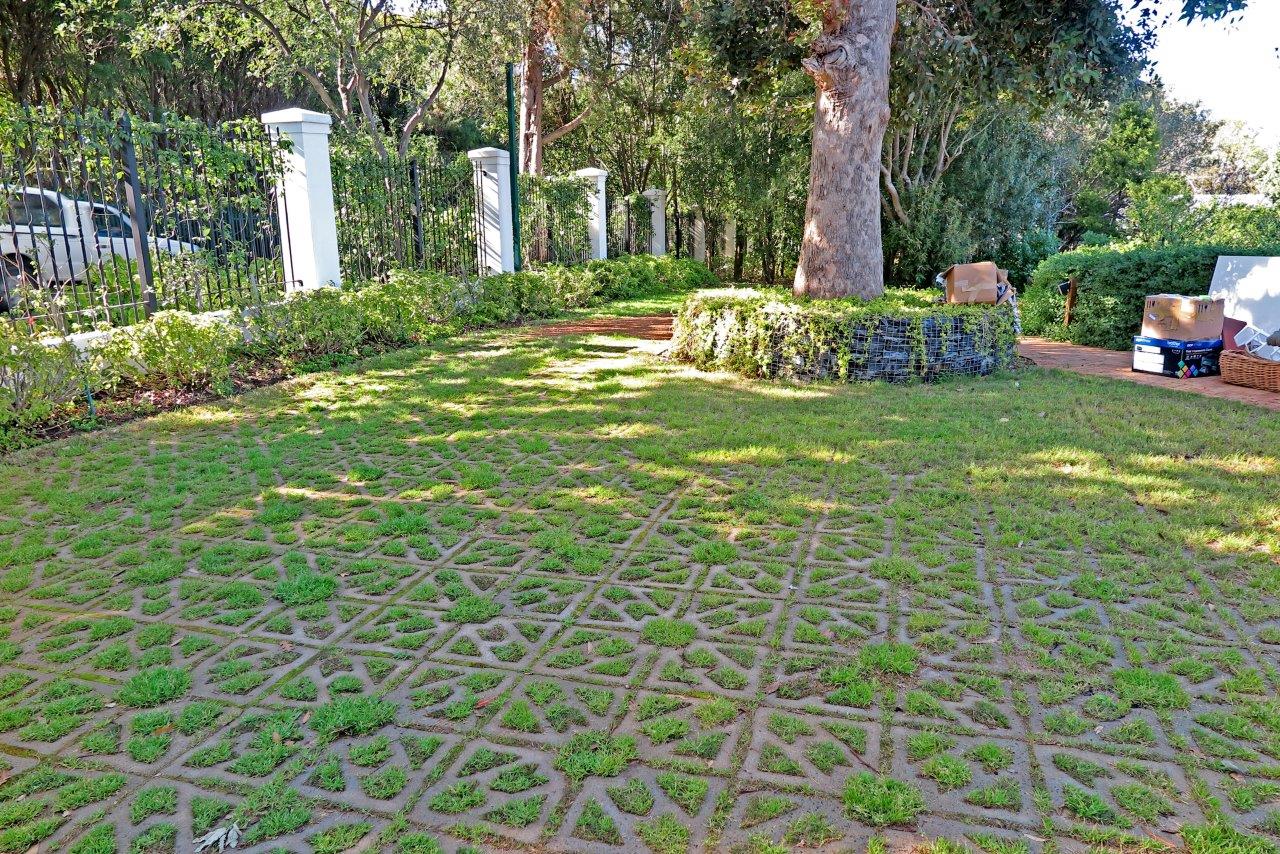