In an interview with Future Cape Town in June 2016, Shannon Royden Turner, director at Actuality states: “We’re stuck in a paradigm of not even realising we’re part of nature”. And she is right. That is why Biomimicry, the design and production of a system that is modeled on biological processes, is so important for the future of any human settlement, as it allows urban centers to shift its historical model of overpowering and controlling nature, to a model that is more integrated and knowledgeable of natural systems. 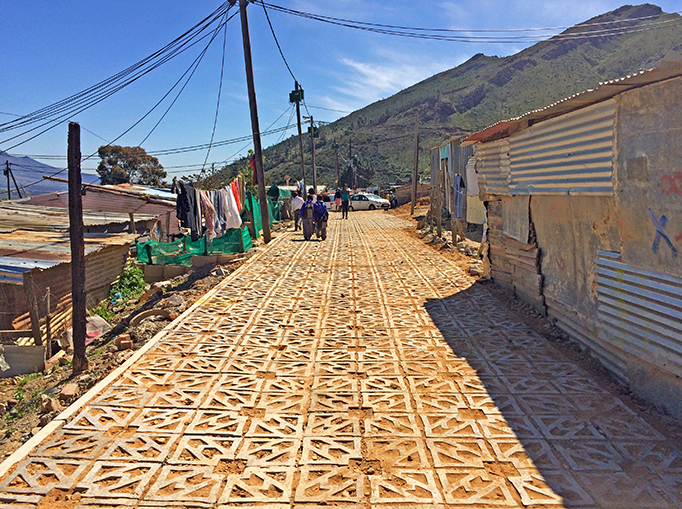 In 2013, Actuality, in partnership with BiomimicrySA started working with the Western Cape Government to solve problems by helping to  facilitate the Berg River Improvement Plan (BRIP) and specifically focus on the Langrug informal settlement, – located 3km northwest of the centre of Franschhoek with a population of 4000 inhabitants. The aim of the project is to deal with the wastewater, storm water and solid waste issues faced due to a lack of infrastructure. The blocks cover a 4-5m wide road surface of about 110m and a smaller 2-2.5m wide pathway of 120m that run parallel to each other. They form part of a broader water management systems that works as follows:

A series of greywater disposal points have been constructed and linked via underground pipes to miniature wetlands and tree gardens – hence the absence of open sewers.

These specially designed wetlands start purifying the water as it moves down the slope from wetland to wetland and ultimately to the municipal sewer system. The system is maintained by the community it serves and they also ensure that everybody follows the rules needed to keep the system functioning healthily and correctly.

And the difference this project is making to the community is already noticeable in solving these problems. Says Siegfried Schäfer, Journalist for the Franschoek Tattler, after visiting the site in in January last year: 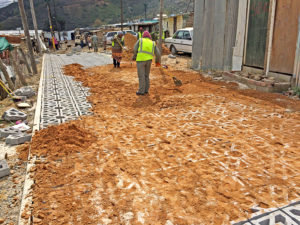 Soil is raked into the Terracrete blocks

“Superficially blocks S and T of the Langrug informal settlement may look much the same as the other blocks. Looking a little deeper though, one soon discovers that something exciting is happening here and the differences suddenly become obvious.

Plastic litter that seems to be everywhere in the settlement is absent here. So are the open streams of foul wastewater. The path between the shacks has a curb to give it a level surface and channel storm water to the nearest storm water drain.  Perhaps most strikingly the informal road is paved with open grass pavers and there are large indigenous trees every few metres along the road.”

Schäfer adds that the project includes monitoring and research by postgraduate students funded by the Department of Science & Technology and the Water Research Commission:

“Every aspect is being documented with the aim of learning as much as possible. Lessons learned will determine the feasibility of implementing this within the whole community and possibly to other informal (and formal) settlements elsewhere. 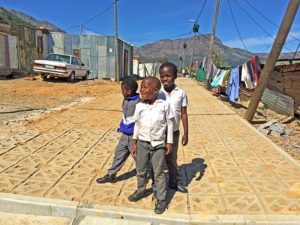 Further phases will include solid waste collection points and encouraging entrepreneurship about waste recycling and upcycling.  The use of ecomachines (biomimicry wastewater treatment systems) for treating storm water at source is the next focus area of the project, which is planned for construction on a section of land adjacent to the Groendal Secondary School soccer field.”