In 2009, The City of Cape Town initiated a project to rehabilitate three anaerobic digesters by constructing a regional sludge handling facility at the Cape Flats Wastewater Treatment Works. A segmental block retaining wall system was considered most suitable for this project, as insitu material consists of fine sand. 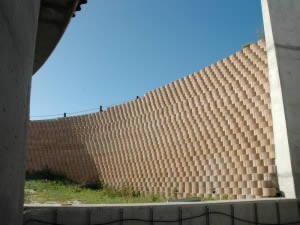 Composite wall around a holding tank 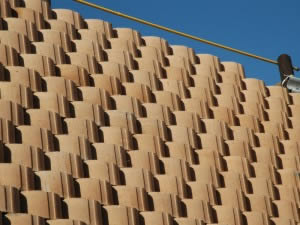 Close-up of the retaining blocks

During July 2010, Aurecon Consulting Engineers approached Klapmuts Concrete, a Cape Town based earth retaining block supplier, for assistance in designing retaining walls of up to 8m high to support earth fill and cut slopes of a new road leading up the sludge holding tanks installed at the upgraded site. 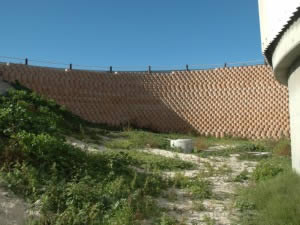 View from above the tank

A segmental block retaining wall system was considered most suitable for this project, as insitu material consists of fine sand and the client needed a closed face block system that prevents sand from leeching through the blocks. In total 5200 blocks were used.