A successful product is one that gets used more than once, having satisfied the expectation of the client. Below is a showcase of two projects that used the same local retaining block to extend long-standing retaining vintage walls.

The first wall, approved by Harries Projects, is a long wavy sound barrier along Ratanga Road that shields residents of the Oasis Retirement Centre from excessive noise and prying eyes. The steep road-facing wall was designed with three curving terraces to reduce the overall footprint of the 500m earth berm and to improve overall noise absorption. 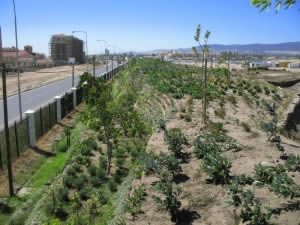 Then: noise barrier under construction 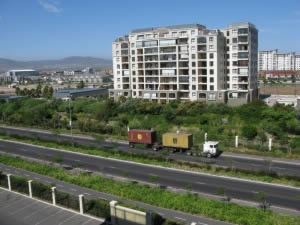 The retaining wall, installed in 2006 by Cape Town based Terraforce approved contractor, Decorton Retaining Systems, consists of around 8000 Terraforce L12 Rock Face blocks with a concrete foundation for each terrace. A subsoil drainage system is located behind the bottom row of blocks while the earth backfill is reinforced with Polytex 115 geo fabric every third row of blocks. The three meandering terrace walls each reach a maximum height of 1.8m to create terraces of varying width. 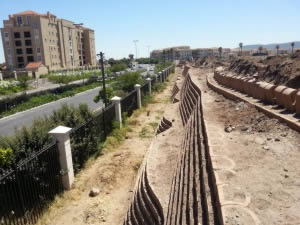 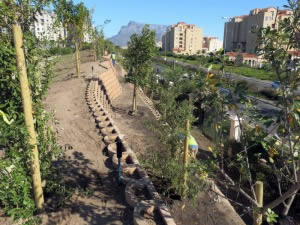 Now: Planting underway on the wall

Seven years later the wall is completely covered by (mostly) water wise, indigenous plants that are also effective in preventing wind erosion on the gently sloping embankments that face the buildings. Pleased with the way the wall has been performing, Harries Projects approved an extension of the noise barrier by around 13 000 blocks, as the development keeps growing. Construction was completed by Decorton in December last year.

At the next site excavations of a steep building site left planners with a 5m high and 95m long embankment, with a 30° surcharge slope above. The client, Atterbury Cape, accepted the design for a composite Terraforce wall with 4% cement stabilized and geo-fabric reinforced backfill, with cut-off drainage and subsoil drainage system. 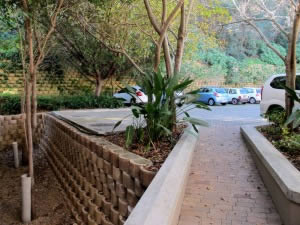 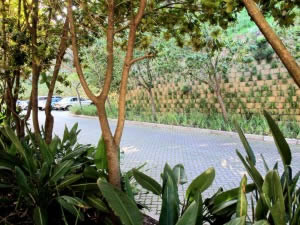 Other walls on site include two 6m high retaining walls stabilizing a 12m high fill platform and various smaller walls, such as a rock face weir and various low toe walls. In total, Dassenberg Retaining, another Terraforce approved contractor in the Western Cape, installed 24 000 Terraforce Standard (round face) blocks, that are planted almost exclusively with hardy indigenous species. The installation is now ten years old and has proven to be very stable and easy to maintain. 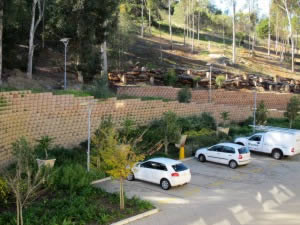 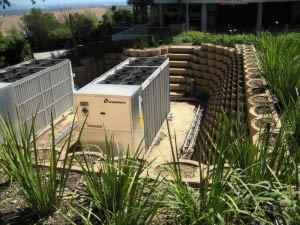 Last year, another retaining wall project was initiated at the same site by Natalie du Preez, Property Asset Manager at Acucap, due to constant erosion problems and partial collapses of new building platforms and unsightly cut slopes. Says Erik Raymond, consulting engineer: “Steep sections of the embankments had to be protected with a flexible earth retaining block walls to reduce the erosion of the excavated face, to prevent excessive ingress of water and to make it more acceptable from an aesthetical point of view.” Acucap approved the design of new Terraforce retaining walls, based on the successful application of the product during earlier phases of the project.

The sheer height and steepness of some of the walls left no space for geo-grid reinforced backfill, and a double layer of blocks with reinforced concrete (Y12 re-bar) had to be used to infill in sections. Says Géorg Brand, of Dassenberg Retaining: “Another challenge was presented by a buried underground 11 kVA cable, the wall footing of the retaining wall needed to start below the level of the cable to prevent exposure of the cable” An interesting aspect was the use of Terraforce L11 and 4 x 4 step blocks around a sheltered pit that houses various utility devices that serve the buildings on site.

To merge the retaining wall with the natural environment, the blocks were filled with topsoil and planted with vygies ( Carpobrotus edulis ). Behind the wall the natural fynbos and renosterbos has been re-established.