In April 2003, The City of Cape Town, Department of Transport, Roads and Stormwater, commissioned Jeffares & Green, a local civil engineering consulting firm, to undertake a geotechnical investigation and propose a design for remedial measures required to stabilise the cut slope failure at Suikerbossie Nek along Victoria Road between Camps Bay and Hout Bay. 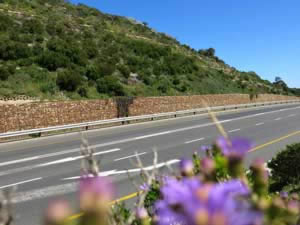 Terrafix blocks were selected in order to trap the maximum amount of topsoil on the face, enabling plant growth 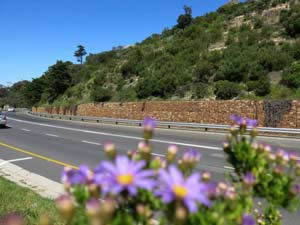 To soften the appearance of the Terrafix blocks, thousands of water-wise indigenous plants were established early in spring 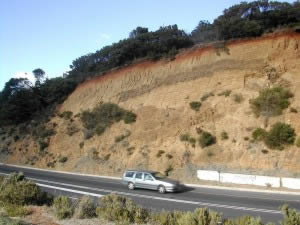 Condition of the original slope 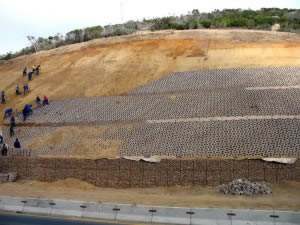 Terrafix blocks being packed onto the slope

The geotechnical and conceptual design of the cut slope failure was undertaken as a result of a previous investigation completed by Jeffares & Green in June 2002, which identified problem areas along the route and highlighted this failure as one of two requiring urgent attention. 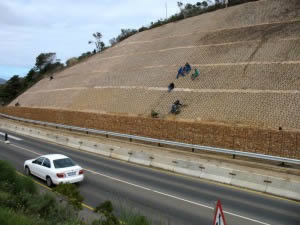 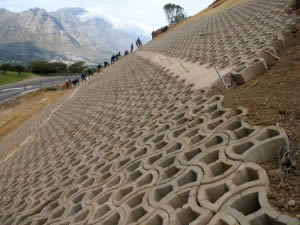 The detailed field survey, coupled with observations over a number of years, led to the conclusion that the erosion and collapses at the site were due to the slope being cut at an angle initially stable in terms of wedge or slip circle failure, but not stable in terms of long-term erosion and/or slip failure once weathering sufficiently reduced the surficial strength parameters. 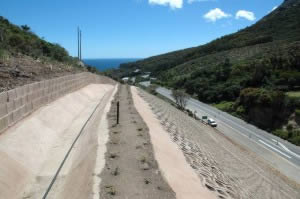 Storm water cut-off at the top of the slope 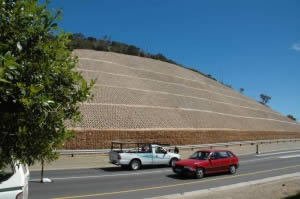 The site comprises a road cutting originally cut at roughly 50° into very soft rock – very highly weathered granite and dolerite –  where a dolerite dyke crosses the road. Says Mike van Wieringen of M. van Wieringen and Associates: “Weathering of the face coupled with the convex shape of the slope and diversion of sub-surface water by the dyke, ultimately resulted in planar slip failures with a gradually advancing head scarp of up to 4 m in height, discharging onto the road during the wet seasons.” 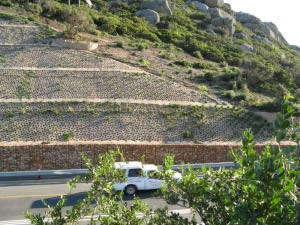 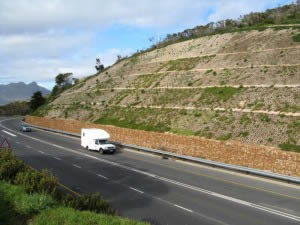 To leave the slope unattended, would result in the gradual eroding back of the slope to a gentler slope.  Say Duncan Murphy, civil engineer with Jeffares & Green:  “At a point when the erosion intersects the cut-off drain, it would be likely that a large erosion gully would form in the cut-face.  The net consequence could have been the formation of a deep irreparable gully extending a long way up the slope.” 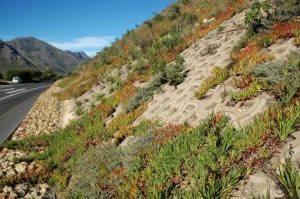 Plants taking over and covering the slope 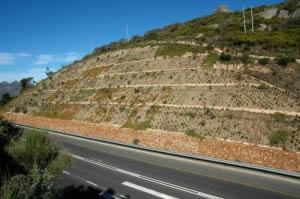 The slope with vegetation taking hold