Terraforce in Namibia. It has been exactly 20 years ago that Namwall took over the Terraforce license in the extreme climate of Namibia. For some 5 years before July 1993, two other companies had taken on the Terraforce license, and failed. Bryan Newby and his wife Linda had to overcome the reservations that had built up in the market and prevailed against many odds. 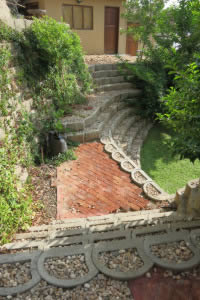 The Terraforce blocks were developed 30 years ago by former Namibian resident, Holger Rust and are now being produced by various block-makers on five continents, in many countries around the world.

In Namibia, Namwall went from strength to strength and are currently well established with interesting projects on hand, and a new Birkenmayer block plant has been installed for increased production capacity and even better quality.

Bryan and Linda’s son-in-law Chris and daughter Leanne are the current owners of the company.  Bryan now consults on Terraforce contracts and has been involved with several large Terraforce projects in the Persian Gulf region, due to his vast experience with earth retaining and the logistics of installing large projects.

Featured below are a few recently completed projects in Windhoek, that bear testimony to the quality of workmanship, being delivered by Namwall. 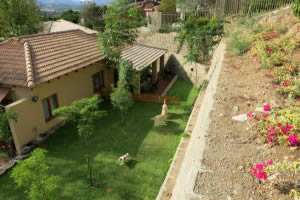 The owner of the property had excavated his backyard to increase the yard size and needed the cut slope retained, as well as access to the top of the embankment.

The Terraforce system appealed to him because of its superior visual finish and economic feasibility.

To add extra reinforcement, a double skin of blocks with soil-crete infill was installed where the wall reached higher than 2m. A spiraling staircase was added to the design, which ended up being easy to install using the same block used for the walls.

The owner of the property was stuck with exposed embankments in his backyard. To cover up the eyesore, he requested Namwall to create a retaining wall that would define the different levels, curves and stairs in the yard. The project still needs to be landscaped by the owner. 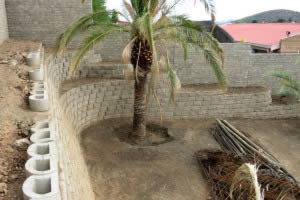 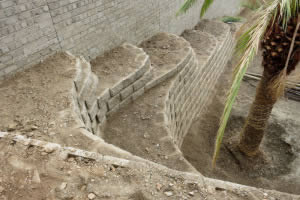 The project still needs to be landscaped

The German Embassy was struggling with large exposed rocky areas on a steep slope that was deteriorating and becoming hazardous to the public and staff. To stabilize the slope, Fred Laker of Terrasafe, designed a wall with a double skin of blocks and Y16 reinforcing rods from the foundations up as well as 25mpa concrete infill in all the blocks up to 3 m high. 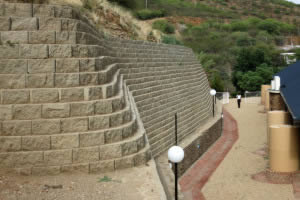 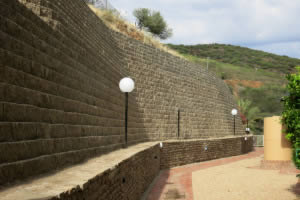 The University needed to stabilize exposed embankments, and Namwall was called in by Murray and Roberts to supply and install a Terraforce retaining wall. The wall consists of a basic foundation and gravity wall not exceeding 2m. 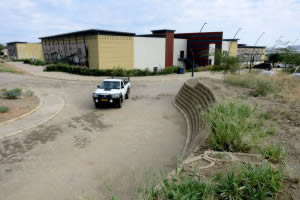 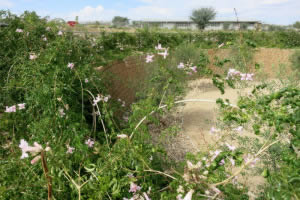 Plant growth on and around the wall