In 2005, Terraforce landed their first major contract in Dubai, using the L16 block to curb water erosion on the fronds of Palm Jumeirah, one the largest artificial islands in the world. Later that year, Terraforce appointed Consent L.L.C. as exclusive producers of Terraforce blocks in the Persian Gulf Region. 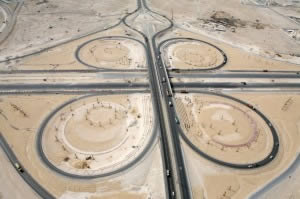 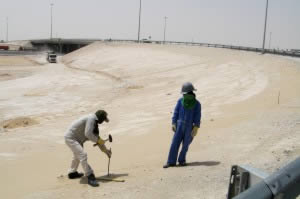 Setting out of the terraces

Since the successful completion of the retaining walls on Palm Jumeirah late 2007, Consent has managed to secure several other contracts, the most recent involving the erosion control and landscaping of three large interchanges on the Salwa International Highway. The Salwa highway is the major arterial connection between Saudi Arabia and the coastal capital of Qatar, Doha. All traffic coming into the city of Doha, including from the United Arab Emirates, enters via this route. The QR441-million project will allow faster commuting for motorists between Abu Samra and Doha and includes a dual four lane highway with 10 major interchanges, three camel crossing underpasses and twenty two Qatar Petroleum culverts. 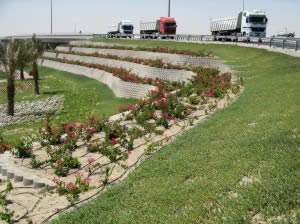 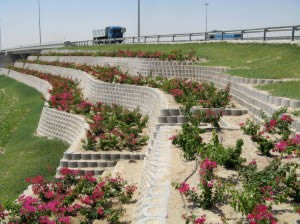 Interchange with round face finish

At Interchanges 15, 17 and 24, a detail was prepared by design engineers of Parsons International Limited, one of the world’s largest engineering and construction organisations for private industries and government agencies, for a series of terraces on the inside faces of all four quadrants of the conventional clover leaf interchanges. Their original design, which closely mapped the original ground profiles – a series of tapered and curved embankments running parallel with the edge of the ramps – called for precast walling, but after AG Middle East (AGME), the appointed landscaping contractor, proposed the use of the Terraforce L16 blocks, based on the successful use of the product on Palm Jumeirah, the alternative designs supplied by Simon Knutton of Knutton Consulting – a well established engineering consultancy involved in authoring the original design guidelines for concrete retaining block walls in South Africa – were accepted.