In 2005, Steyn Swanepoel, from Steyn Swanepoel Landscape Design, and Luis Jordaan, his experienced project manager, were faced with complex site conditions when devising a remedial solution for an overgrown wetland located on privately owned land within the city bowl below Table Mountain. 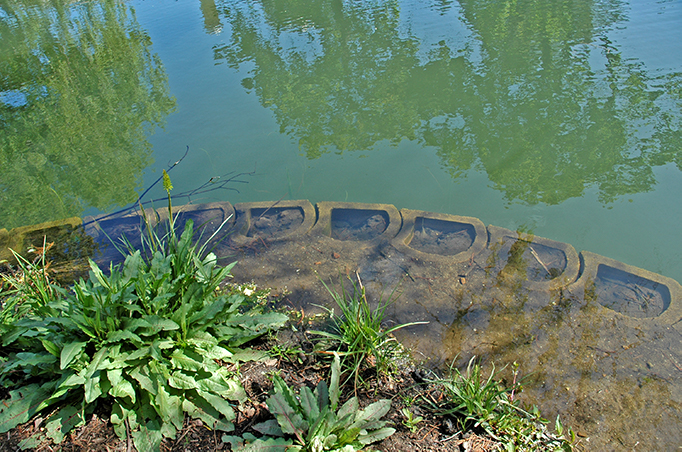 The blocks cope with being submerged with no problems at all 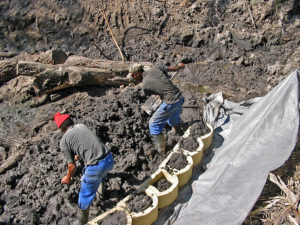 Bagged gravel was placed in a trench and wrapped in non-woven geofabric, extending behind the Terraforce L11 blocks 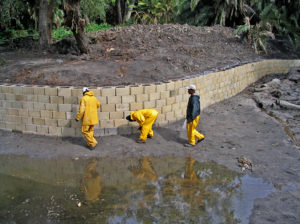 To prevent alien vegetation from encroaching easily, the Terraforce walls are constructed at a steep angle of 85°

The wetland is fed by a natural spring – one of many which occur in the area – and runs continuously throughout the year with the water being left to drain into the surrounding soil. In winter, when there is a surplus of water, the excess was channeled into the city’s storm water system and disposed into the sea. 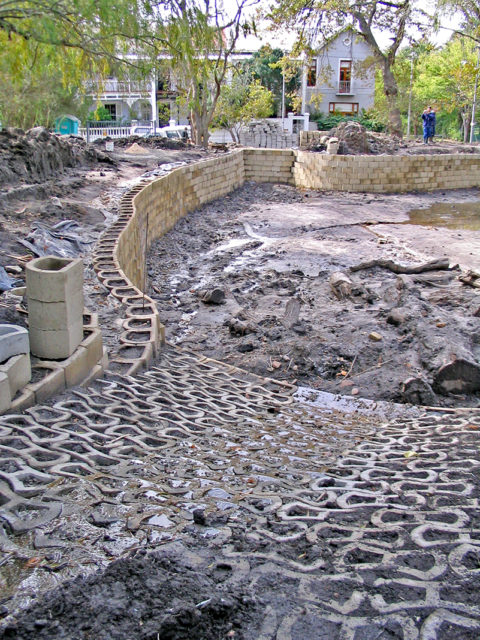 Over the years, however, the area degraded into an environmental problem, with alien vegetation taking hold and the intention now is to ultimately transform the site by creating a mixed indigenous environment featuring a bird sanctuary with a 500-m² pond.

Notably, Terraforce, national and international licensee of permeable and plantable concrete retaining wall blocks,  was then already warning the industry on the importance of utilising as many green building techniques and indigenous planting strategies as possible.  As a response to this general situation in South Africa – degradation of natural resources and rain water depletion – Terraforce had completed a comprehensive guide to South Africa’s indigenous plants in 2005, especially those that require little watering and are adapted to our harsh climatic conditions.

Developed and researched in collaboration with Kirstenbosch National Botanical Gardens — especially Ernst van Jaarsveld, well known horticulturalist and author of gardening books — the guide aims to give the reader an easy to use introduction into the indigenous plants suitable for growing on plant supportive retaining walls and erosion control measures around South Africa.

In tandem with the release, Swanepoel’s wetland rehabilitation conceptualization became a prime example of a Terraforce installation following the principles of rehabilitation of our indigenous environment, specifically utilising local plants. 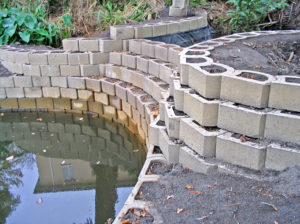 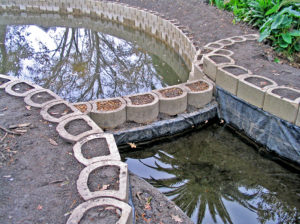 Because of the particular soil conditions, it was decided to line/demarcate the dam perimeter with a dam ‘wall’ to ensure long-term sustainability. This would ultimately prevent the excavated hole from shrinking (unstable mud from the sides breaking up over time) and alien plants establishing a foothold on the banks. 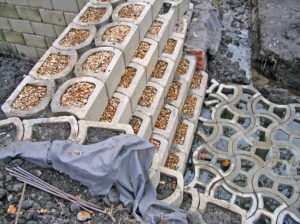 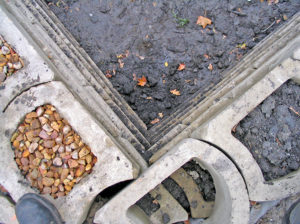 Neatly installed corner detail on site, created without cutting of the blocks

Another important aspect involved ongoing maintenance of the site: one of the criteria stipulated a depth of at least 1,2 meters, to avoid the spread of alien water plants. Should removal of alien vegetation be required from time to time, a visibly demarcated shoreline will facilitate the ease of this task. The high water table in this area will allow for a pond that need not be waterproofed, making a ‘permeable’ structure indispensable. 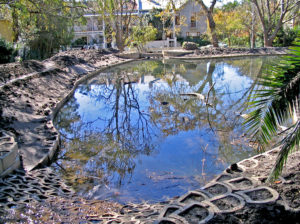 The pond, after completion. Now landscaping and seeding can take place 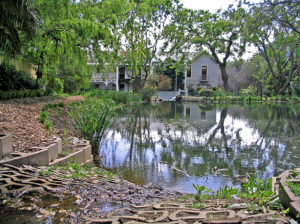 Landscaping beings and slowly the plants grown in

What made this project challenging was the fact that all planning carried out in the winter months, with actual execution taking place in summer (the driest months) when site conditions would determine construction method. All role-players were consulted and based on the multitude of information gathered and knowledge shared, a basic methodology, allowing for variations when needed, was decided upon. There was no way of predicting whether the excavations and Terraforce walling would be feasible in water saturated soil conditions, especially with a continuous spring feeding the area.

In the middle of January channels where dug to divert the water from the core area, but before work could start in earnest, other issues had to be dealt with. The site is situated in the middle of a suburb with limited working space and all construction methods had to be approved for suitability to sensitive wetland. 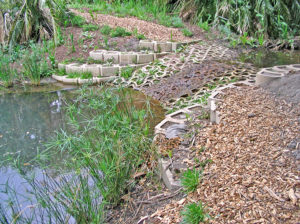 One of the inlets in action, lined with the Terrafix erosion control blocks 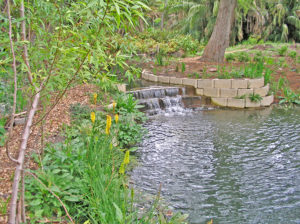 Another inlet with water moving freely into the pond

One of the biggest challenges turned out to be the excavation process. At one point there were three mechanical diggers busy assisting each other getting unstuck rather than making any progress with the job at hand. To everyone’s pleasant surprise, a layer of firm, coarse sand was exposed at about the right level for the foundations. Coarse gravel in bags were placed in a shallow trench and wrapped in non-woven geofabric, which also extends behind the Terraforce L11 blocks, all the way to the top. 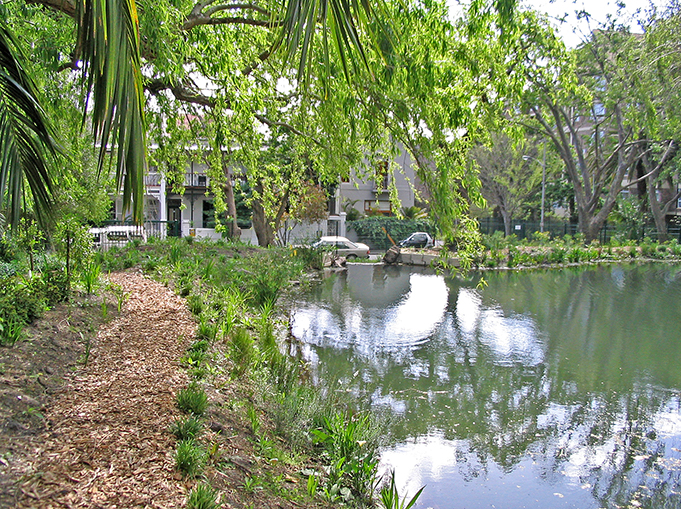 To prevent problem plants from encroaching with ease, the walls are constructed at a steep angle of 85°, while the in and outlet areas will allow migration of various creatures even when water flow has to be diverted for maintenance purposes. Swanepoel envisioned a pool with crystal clear water, conductive to indigenous fauna and flora. To this end Ernst van Jaarsveld of Kirstenbosch National Botanical Gardens was consulted.

He suggested some water plants that absorb minerals and nitrates and in addition release oxygen into the water. The list includes the following well-known plants: 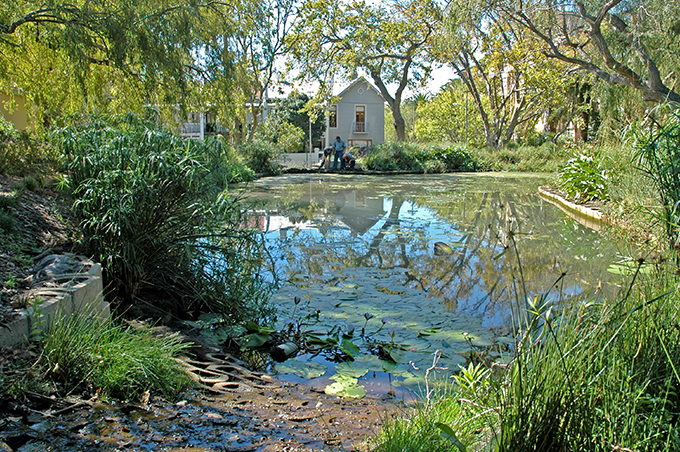 Years later and the site is still a complete success

He also suggested that artificial underwater shelters in the form of old tires be created to anchor these plants. Once this specifically planned landscaping took place, the sandbags that were diverting the stream were removed and the pond steadily filled with water, following its natural course once more.

When recently speaking to local resident, Hans Vogt, who lives close to the wetland, it is clear that the project is a complete success: “The site is now a sanctuary for indigenous plants and birds, and is regularly maintained with the addition of local plants and the removal of any alien vegetation.”