The “why” part is easy to answer. We want to protect our valuable possessions and infrastructure, such as houses, tourist destinations, pipelines and harbour entrances against the dynamic forces of wave action.

For heavy duty protection works, the best option is to mimic, as closely as possible, a natural solid rock beachfront, as this has previously stood the test of time. Many examples of this method, in the form of solid concrete walls, sloping or vertical, exist. These methods however, (often combined with extra heavy rock rip-rap) are not always possible, due to their prohibitive cost or the lack of solid founding conditions, so alternative solutions have to be found. 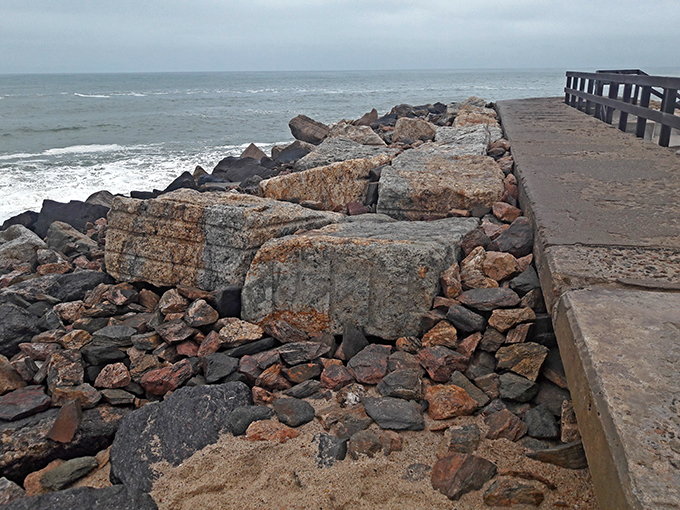 Where sandy conditions occur, it has often been shown that one could simply rely on mother nature to give back what was removed in a rage. Says Johnny Kuzlo, Retain-A-Wall, Umhlali: “Nature never steals from itself, until humans arrive on the scene”. Alternatively, sheet piling, or piles of wood glass-fibre or concrete may be considered, sometimes in combination with erosion control blocks on the upper reaches of the installation. 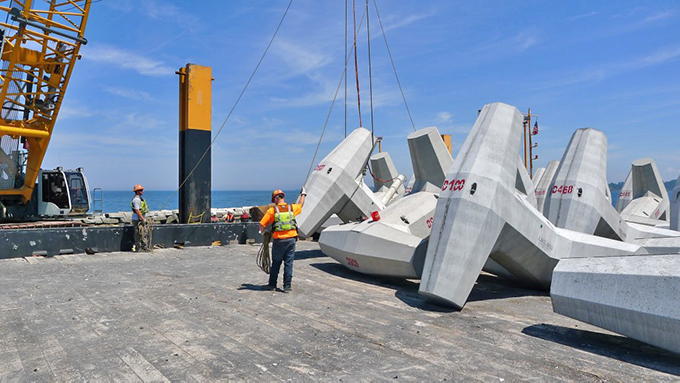 A South African invention, the Dolos

A South African invention, the Dolos, developed in 1963 by Aubrey Kruger and Eric Merrifield, to protect the East London harbour entrance, has since been used with much success in many parts of the world. They weigh 80 tons each and around 10 000 are required to protect a km of coastline. The Dolos is highly effective in dissipating, rather than blocking wave energy. This advantage comes at a cost, as can be imagined, and they have been shown to be reduced to rubble under extreme weather conditions. 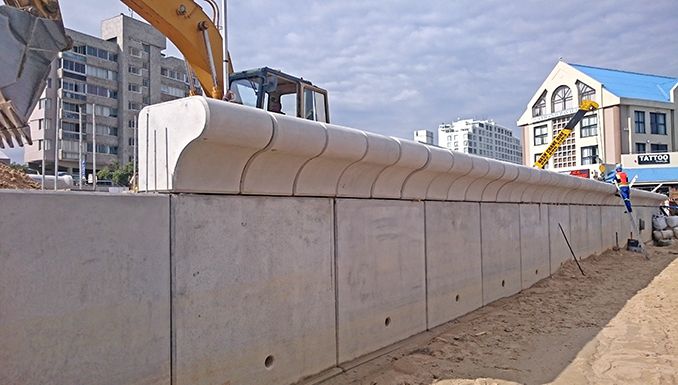 An installation of factory made, L shaped concrete units is currently underway in Strand, Western Cape. Weighing up to 16 tonnes, they are placed by crane on mass concrete foundations that are mostly cast on bedrock, alternatively rock foundation with gabion scour protection. A heavy coping unit of 1,5 tonne weight is securely connected with galvanised reinforcing over the wall units. All concrete components were factory made by Concrete Units to achieve the high standard that is crucial for such applications.

Another recent development in remedial protection measures to re-instate damaged parking areas and promenades, is the application of large format geotextile bags (Envirorock R) that are filled with beach-sand. They weigh about 3,5 to 4 tons and are claimed to be abrasion resistant and vandal deterrent. This option is also referred to as the “soft alternative” and some engineers include gabions with this option. For most of the time they will be buried below the beach, often serving as a foundation for CRB (Concrete Retaining Blocks) walls above.

Where good rock foundations occur or on sandy beaches that can accommodate foundations, installed below lowest scour profile, Segmental Concrete Retaining Blocks may be used, with limitations.

At Palm Jumeirah, Dubai, United Arab Emirates, over a million Terraforce CRB blocks were used to provide erosion control and beach access steps to the individual “fronds” of the man-made island. The walls are exposed to minimum wave action and are in perfect condition more than ten years later. Plants have also flourished on the walls, even in the harsh conditions of the region.

Interlinked CRB’s with an open face configuration are not suited at all, whereas such designs with a closed surface structure have been used with mixed success. Their flexible nature has been shown to absorb wave energy to a point.

Where failures did occur, in 2007 and 2011, it was mostly due to drainage issues caused by overtopping waves. If and how this was helped by the movement of the blocks, within the structure, is unclear.

One of the oldest CRB beach protection measures in South Africa was installed in 1986 at Laguna beach near the Umgeni river mouth. Important implications, relevant to installations that are occasionally subjected to the force of wave action, were taken into account:

A project profile of the Laguna beach project can be viewed here – Terranews 13/S/1986 The beach has eroded down to foundation level on a number of occasions when big storms have hit this coastline, and the 6m high wall has been very effective in protecting the pools installed immediately behind it. Currently the wall is almost completely buried by sea sand, deposited there by waves and currents. This phenomenon, referred to as beach filling/nourishment has possibly been helped by groynes, hard structures of heavy rock at right angle to the beach, that were installed further west, since 1986. 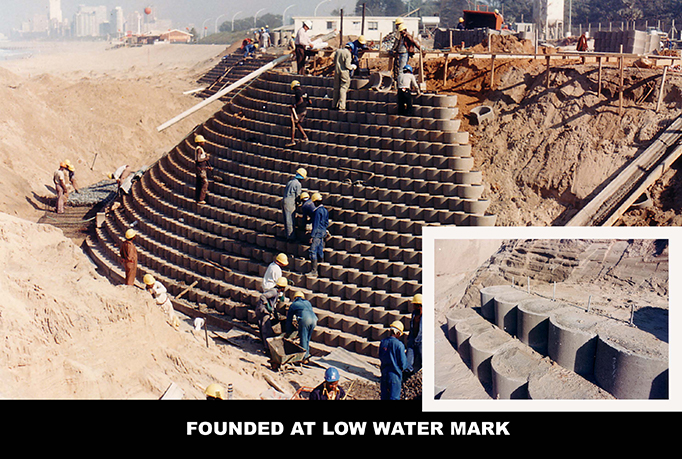 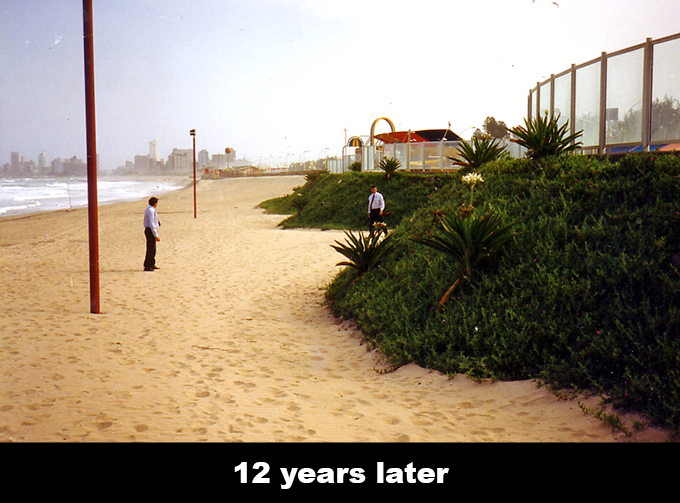 How does concrete interact with sea water?

Planners should also be cognisant of the durability of products used close to the sea. Concrete is not likely to be damaged by acts of vandalism, but like all other materials, is subject to abrasion and to the destructive forces of salt crystals. Mix designs should ensure that dense and non-porous concrete is used. Says Bryan Perrie, Concrete Institute, South Africa: “Concrete is generally not affected chemically by sea water. The concrete deteriorates due to salt crystal growth and the abrasive effect of the waves, which often include sand in them. The only way to resist these forces is to ensure dense, well-compacted concrete to prevent ingress of the salt water into the concrete, and high strength to resist the abrasion.”

Where good rock foundations occur or on sandy beaches that can accommodate foundations, installed below lowest scour profile, Segmental Concrete Retaining Blocks may be used

Sam Nejad, Principal Engineer, Director, Engineering Online, Geraldton, Australia adds: “The concrete of the blocks can be made impermeable by adding fine polypropylene fibres (1.2 kg/cubic metre), 1 litre of PVA (Bondcrete) per cubic metre, and a slump of just 60, brought up to 90 with superplasticizer ADVA 145, then fully machine compressed and vibrated. Concrete is sensitive to any salt in the water used for the mix. The salt reduces its strength. Ideally, rainwater would be used.

But if that’s not possible, the absolutely freshest water that is available should be used. That is another reason for using superplasticizer, it reduces the amount of salt in the mix. Direct wave impact needs to be assessed on a case by case basis. The infill mix would be similar, but the configurations of the blocks will need careful design. I have seen massive walls designed by multinational experts and built at a cost of tens of millions of dollars, disintegrate within just a few months. Sometimes Nature has to be left alone to take its course”.

One could say in conclusion, that when faced with shoreline repair, that concrete block density and near-impermeability, coupled with sufficiently rigid constructed mass to resist the dynamic forces of occasional wave attack, are to be considered first.

Other important details to consider involve foundations that can pass the test of time, full block closure to prevent scour of backfill, rigid interlock (vertically and horizontally) and deep drainage behind the installation, possibly combined with geo-grid reinforcing, securely tied to the wall. The project should also be environmentally compatible and provide support for marine life, as best as possible. The possibility for built-in plant pockets would also be an added advantage.

These photos were taken at a site where the wall under construction was designed to never endure wave attack, ie. to be covered by beach sand all the time, and has a first line of defense installed, in the form of the aforementioned large format geotextile bags that are likewise totally covered by sand, until a storm strikes. View more details of this project here: Ajman step by step. 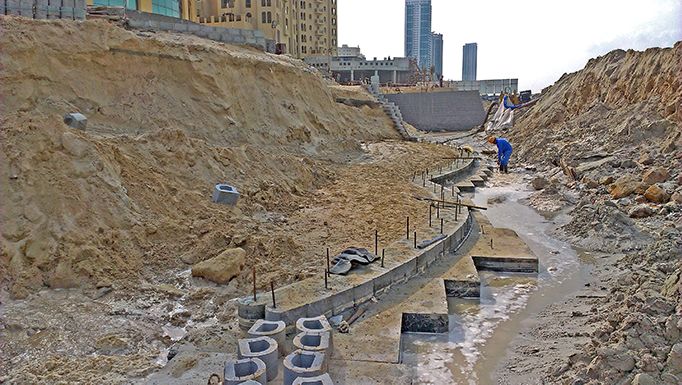 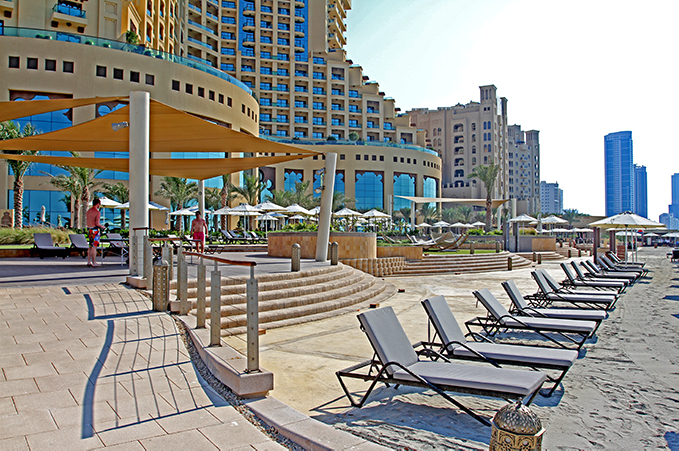 The Fairmont Hotel site, after the beach wall was filled in

The cross section below shows a CRB wall proposal that will work under certain conditions.

Please note this design is an generic example, site conditions will need to be considered for every new beach erosion protection site. 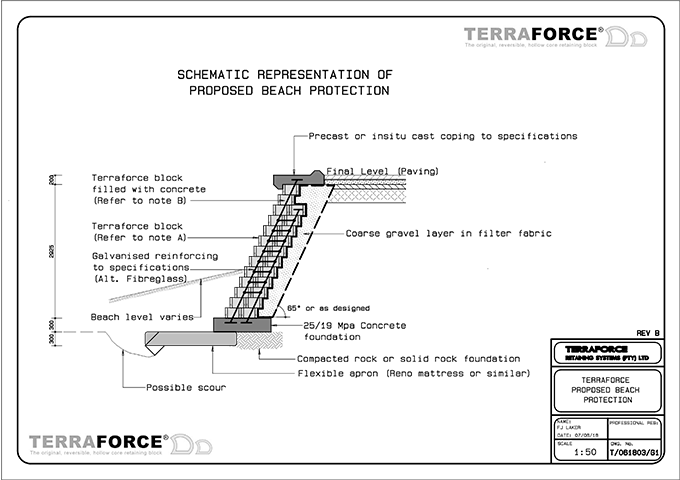