The Swaziland Electricity Board (SEB) of Mbabane was faced with an infrastructure rehabilitation/maintenance question that had to be attended urgently, in a sustainable and cost-effective manner. Says Holger Rust, CEO of Terraforce: “A feeder canal in the Sigangeni community, that is feeding water to two hydro-electric power stations was being undermined by an adjacent stream, which caused cracks, with consequent leaks compounding erosion/collapses on the embankments.” 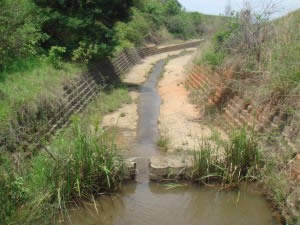 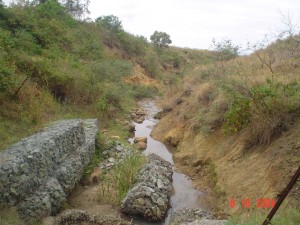 “Total collapse of the canal would have meant substantial loss of electricity generating capacity in the area.” 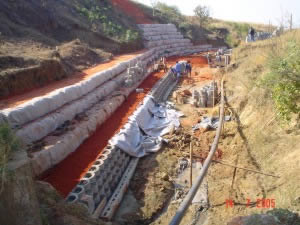 Progress on worst affected side, below feeder canal

“The stream has a catchment area of 2,5 Km2, with an anticipated 1 in 10 year flood of 10m3/sec. Average flow in the summer months is 3 to 3,4m3/sec. Soil in the area is considered dispersive, which led to the collapse of gabion weirs that were installed previously.”

The 5 tenderers, who had to submit their bids during October 2004, following a compulsory site inspection, were specifically encouraged to submit alternative, sustainable solutions, designed by specialists and backed-up by the necessary design calculations. 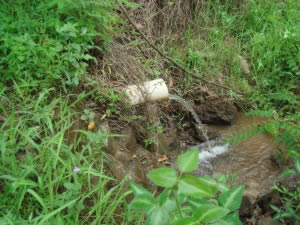 One of the sub-soil drain outlets 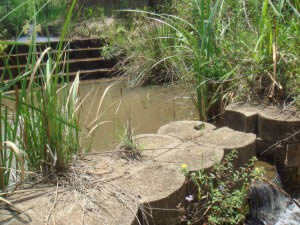 Close-up of the weir and stilling basin

EFS Construction, one of the bidding parties and Terraforce licensee in Swaziland and Mpumalanga, approached Johan Joubert, an expert in slope stability and foundation design, to propose an alternative design, which was ultimately accepted by the SEB. Tender prices of the original proposal went up to and over R3 million, with alternatives ranging between R1.5 and R2.5 million, the former submitted by EFS Construction, based on Johan Joubert’s design. Since work had to be carried out during the dry winter months, there was time to fine-tune remedial measures and costs were brought down by setting up a joint-venture between the SEB and MiLiTo Precast. 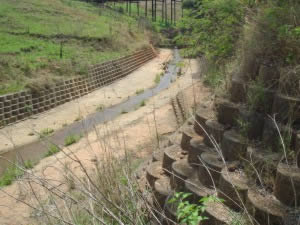 Looking up-stream towards weirs and aqueduct 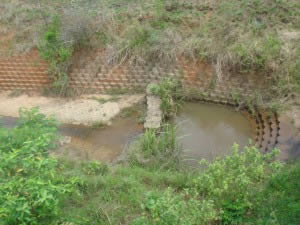 Michael Toepfer, owner of EFS Construction adds that another determining factor that favoured Joubert’s proposal was the minimal heavy earthworks that would be involved in carrying out the remedial work: “Our proposal would have the least impact on Albert Dlamini’s farm, a local and dynamic farmer who in the last 25 years has managed to quadrupled the acreage of his farm, a request that had been specifically made before planning started. The high-risk nature of the undertaking made solid professional indemnity insurance absolutely necessary.”

EFS Construction supplied Terraforce L11 retaining blocks for the side slopes and weirs and Terracrete erosion control blocks for lining the invert. They also supervised the installation by a team of SEB employees and temporary workers. Work commenced in May 2005 with the removal of as much unstable clay as safely possible on the critical section of the embankment, just below the feeder canal on the right hand side, facing up-stream. To avoid any unexpected collapses in this section, EFS Construction used recycled cement bags from their production plant, filled with a 3% sand-cement mix, stacked in lifts of three bags high and wrapped in geo-fabric (tied back into the coarse backfill for a distance of up to 4m) for additional stability.

Says Teopfer: “This measure forms an integral part of the design and is connected to the outer layer of CRB’s with protruding geo-grid and wick-drains, to prevent a build-up of subsurface water.”