Limited space and precipitous slopes called for some specialist geotechnical engineering in the construction of some of the concrete block wall structures in Bakoven on Cape Town’s Atlantic seaboard. Installed by Terraforce Recommended Installer, Dassenberg Retaining Systems. Specialist geotechnical engineering in the construction of Terraforce walls in Bakoven, Cape Town 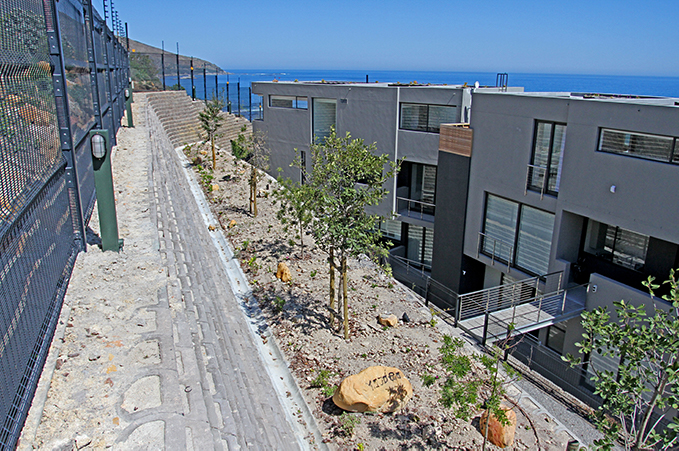 View from the very top of the Terraforce wall

The walls were built to retain a steep granite embankment which was cut to create a building platform for the construction of Infinity, a luxury six-storey apartment block offering spectacular views of the Atlantic and the Twelve Apostles mountain range. 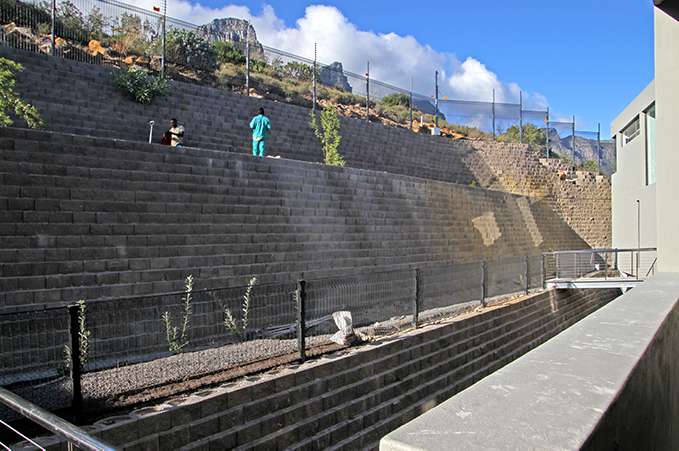 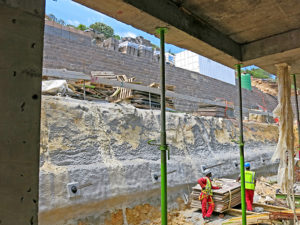 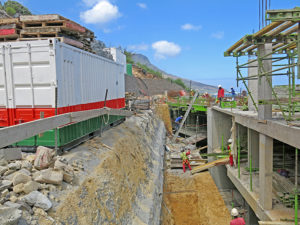 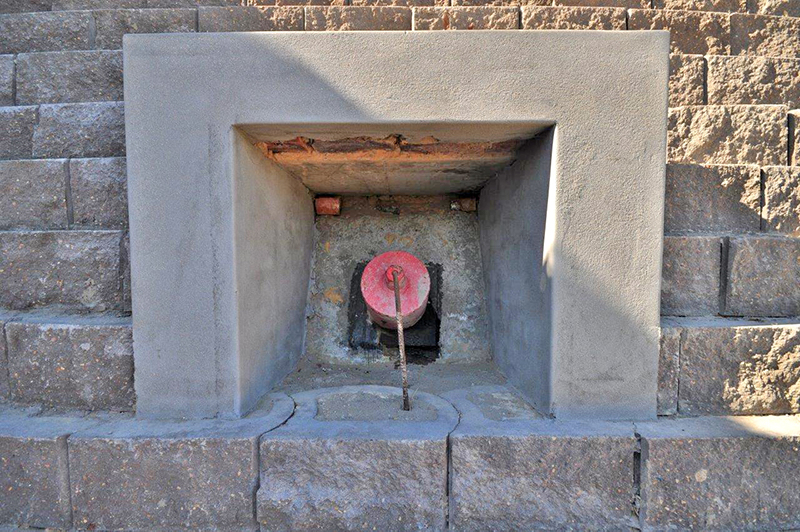 Apart from the sea-facing front elevation, the remainder of the building is enveloped in a cocoon-like concrete block wall structure of varying heights and angles. The walls were designed by structural engineer, Fred Laker, with geotechnical engineering input on the three walls at the rear of the property from Kantey & Templer Consulting Engineers for the principle retaining components. All the walls were built by Dassenberg Retaining using L12 retaining wall blocks supplied by CMA member, Cape Retaining Systems. 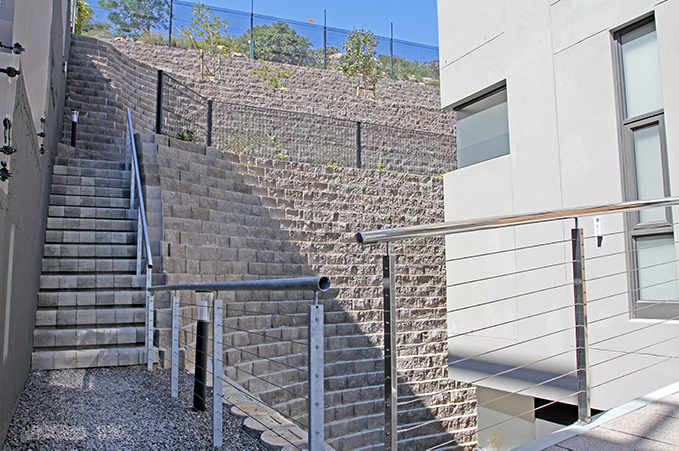 Looking up the side of the building, with access stairs and hand rails

Geotechnical site inspections and a detailed slope stability analysis conducted by Kantey & Templer revealed that the bulk of the materials exposed in the cut face took the form of deeply weathered granites. It was determined that if left unsupported parts of the embankment could be prone to instability during periods of high rainfall. 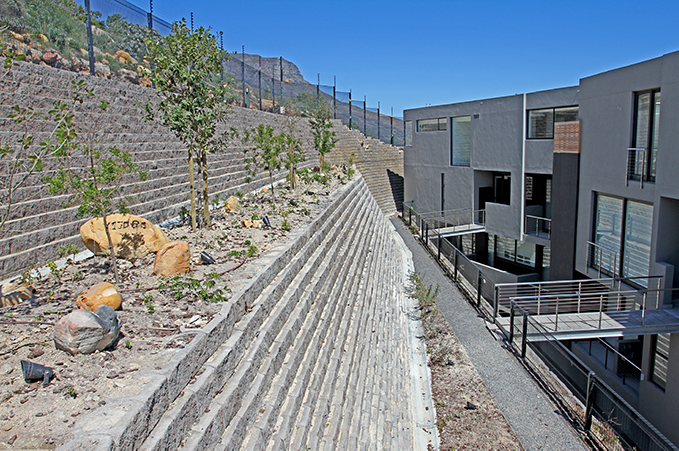 Apart from the sea-facing front elevation, the remainder of the building is enveloped in a cocoon-like concrete block wall structure of varying heights and angles

Following an assessment of various support options Kantey & Templer recommended that two of the three main rear concrete block walls be provided with 300kN tie-back anchorages and concrete waler beams. Geofabric reinforcement was not an option in this instance due to the space between the retaining wall block facing and the embankment face being only 300mm. Steel reinforced, the waler beams measured 350mm thick and about 1000mm high. They were constructed on the upper and lower wall sections and span the full width of the embankment face. 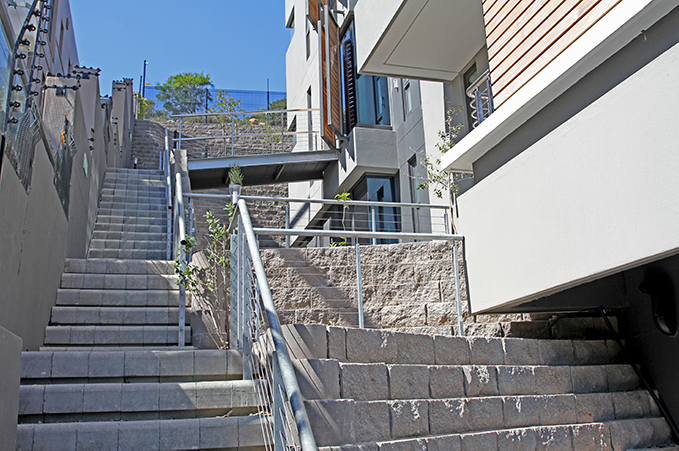 Further reinforcement was achieved by filling the block-work in the lower half of each of the three main concrete block walls with steel reinforced concrete. Free-draining sand was used to fill the space between the blocks and the embankment. The total combined height of the back-yard walls is 12.4m. The lower wall is the highest at 5.6m. The middle wall tops 3.7m and the upper wall 3.1m. Each wall was built at an angle of 75˚. There are two narrow terraces between the lower and middle walls and the middle and upper walls. 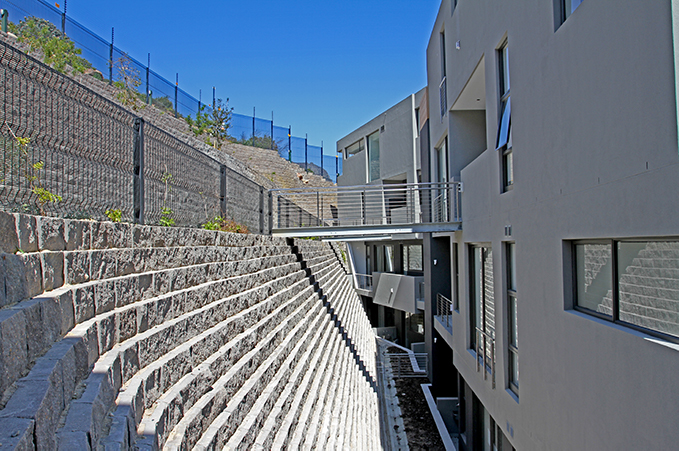 The total combined height of the back-yard walls is 12.4m

A sophisticated sub-surface drainage system was built into the design to handle the percolation of water from the slope and to prevent the build-up of pore pressure. In addition, rain water flowing off the mountain slope is captured in a stone filled trapezoidal concrete channel which drains away from the wall into the storm-water drainage system.

Perforated 100mm pipes were installed at the bottom of the fill material behind each wall. These drain into core drain pipes which in turn drain into storm-water pipes. The storm-water pipes run under the building and drain into a silt trap which then flows into municipal drainage. 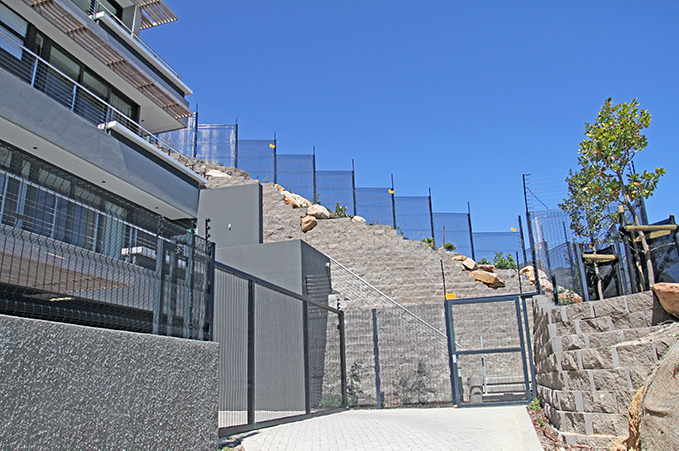 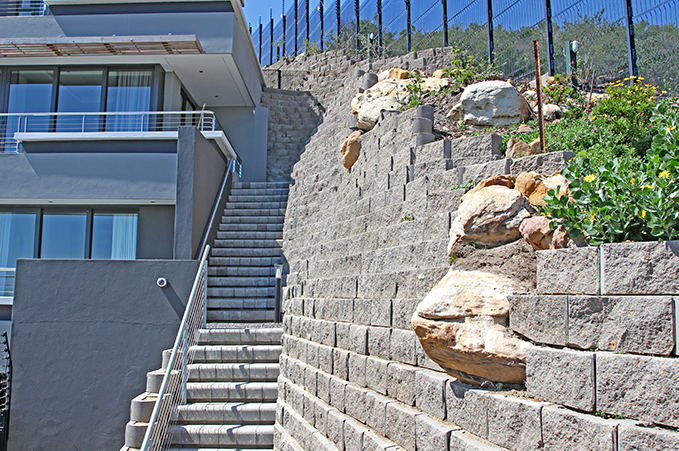 Fire escape staircases on each side of the property were built as part of the retaining wall structures using Terraforce’s 4×4 Step blocks.

Landscaping on the terraces and walls was undertaken by Urban Landscape Solutions, who were responsible for the fine grading, installing drip line irrigation, planting indigenous, water-wise plants, laying stone, installing a modular planter system and some rehabilitation work. Besides planting the terraces and down the sides of building alongside the retaining walls, each level of the building had planting on the balconies installed using a modular system in which plants were planted up in crates instead of in actual planters. This allows for easy removal of sections in order to replace sick, dead or damaged plants. 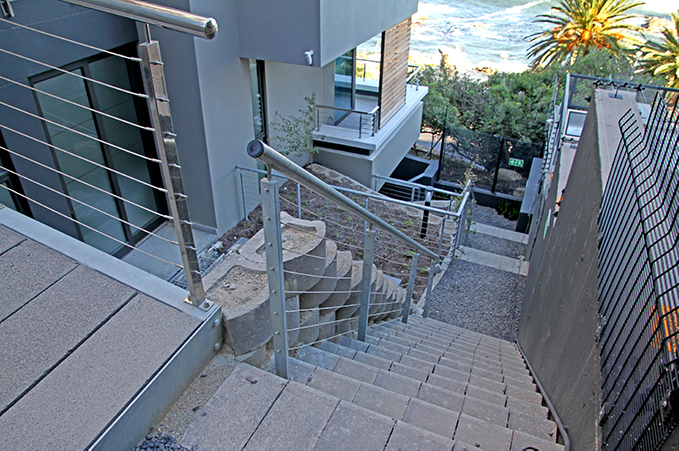 Down the step on the side of the building 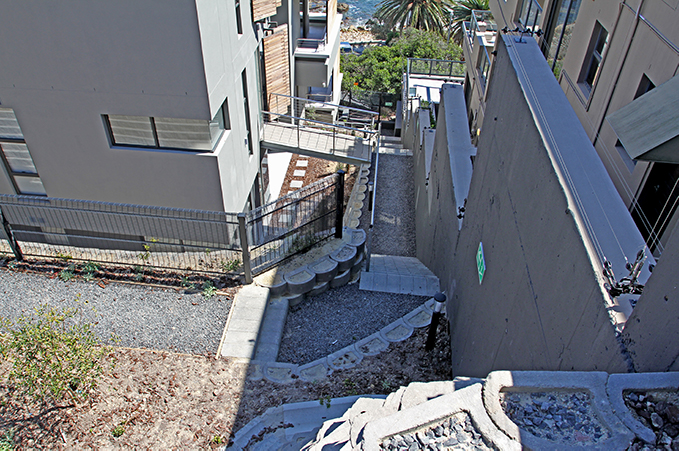 View down from the top of the wall