May this year, Elgin Rust, our in-house media producer, travelled to Dubai to visit Consent, Terraforce’s licensee in the United Arab Emirates. Consent is proud to be part of the Terraforce community since 2005 and have since been involved in numerous prestigious projects in the UAE and GCC countries. Most notably Consent supplied over a million blocks to Palm Jumeirah, Dubai, to help Nakheel, one of the world’s leading property developers, create sustainable beach front gardens along each palm frond. 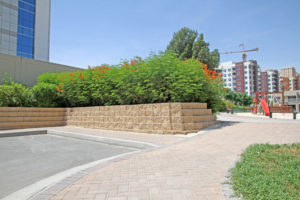 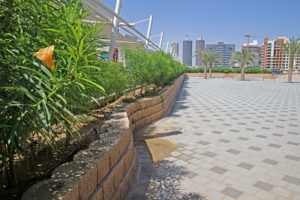 Another Terraforce wall at Silicon Oasis, Dubai, bordering a park

The Palm was also the first stop on the Trip, as it was the site where the Middle East Smart Landscape Summit 2017 was held. For this leading event on sustainable landscape solutions, 26 eminent speakers addressed pressing issues around public space, city development, water conservation, the role of trees, indigenous vegetation, biophilia and sustainable planning to create greener, healthier and happier Gulf cities.

For the second part of the trip, Rust joined Sinan Awad, Alaamal Construction CO LLC, Terraforce block installer in the region, for a day of site visits. Here we had the chance to witness the miracle of Dubai, a city which strives to turn a desert city into a green oasis, with the help of sustainable, and in the case of Terraforce blocks, plantable landscaping products.

Walking out into 40 degrees Celsius, it was astounding to see the irrigation master plan at work, using treated sewage effluent as landscaping irrigation water to turn Terraforce retaining walls into lush green spaces within a year or two. 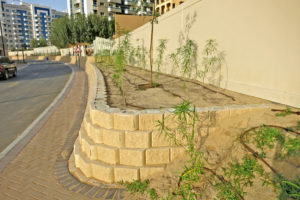 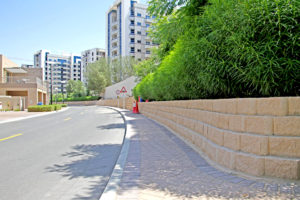 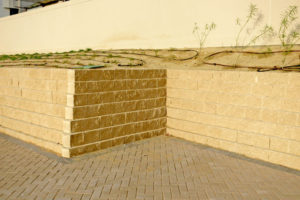 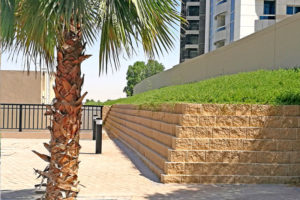 The same corner detail, Silicon Oasis, in May 2017

First stop was the aptly named Silicon Oasis. Here the Terraforce L16 block was used in a residential complex to create a recreational outdoor area for residents. The green boundary wall flanks the outdoor pool, children’s play park and access roads. At another site, the blocks were used to create a public space complete with palm trees and benches. 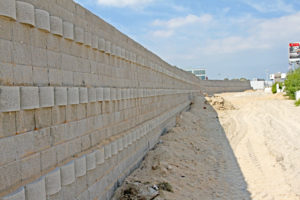 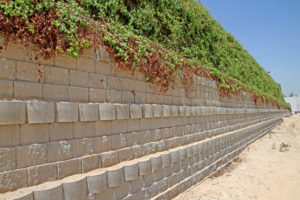 A year layer plants are growing more and more, soon to cover most of the wall

Another very impressive site visited was the Al Jalila Children’s Specialty Hospital, an initiative of His Highness Shaikh Mohammed bin Rashid Al Maktoum, Vice-President and Prime Minister of the UAE, and Ruler of Dubai. Here the L16 blocks were installed by Awad and his team in June 2014 to create a green sound barrier as the hospital is located next to one of the main highways. Careful selection of the plants along with a drip irrigation system (on a timer) has allowed the green wall to flourish, creating a sanctuary for the patients being treated at the hospital. 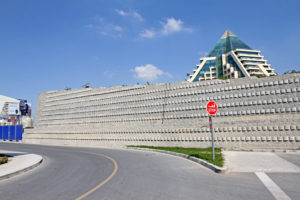 The wall creates a noise barrier between the hospital and road. Here plants are starting to grow in 2015 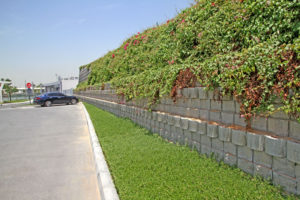 More than two year later, and the plant growth is busy covering most of the wall on both sides of the barrier

And the results are impressive. Says Holger Rust, founder of Terraforce in South Africa, after he visited the site February 2015: “This must be the most efficient irrigation system ever. The exposed pipe was hidden by the plants (portulacaria afra) within 3 months. Each plant has a dripper and water provision for each plant can be accurately controlled with a timer and wastage of the precious resource is reduced to a minimum. Further the system is extremely maintenance friendly and repairs are a breeze.”

To read more about this retaining wall, click here. 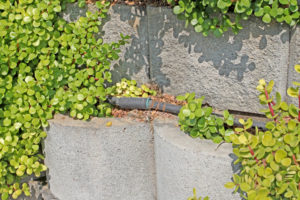 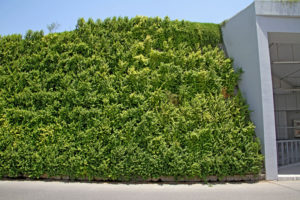 Plant growth is busy covering most of the wall on both sides of the barrier, creating a green curtain between building a road

It is not hard to see why Terraforce has become a popular method of earth retaining in the UAE, being the only product on the market that is hollow core, thus allowing plants to flourish inside the blocks, as well as on top of a wall. The system is perfect for a desert metropolis that wants to transform into a shelter of green in the middle of a hot and unforgiving desert.