Holger Rust, founder of Terraforce, licensor of permeable and plantable concrete blocks for erosion control and earth retaining, has long been motivated by the conviction that every person who has the capacity, should strive to improve his environment, not destroy it. He has adopted this message from his father, Martin Rust, who was a guiding example in this regard.

In 1988 he purchased the farm Dixonsberg, that is situated in the Breede River Valley and straddles the watershed between the Breede and the Klein Berg river. After some research Holger was able to reconstruct some of the history going back to the year 1947 when Ferdinando Costa bought the 350 morgen for 1875 Pound from Mr H Groenewald. The plan was to plant olives, hence the name Olivia. Poor soil conditions and limited water resources put an end to these plans and Olivia was used for varied farming operations, with limited success under equally varied ownership. 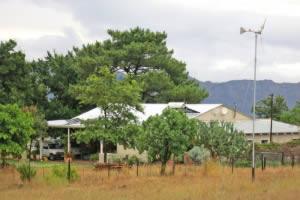 The farm house on Olivia, with wind turbine in the foreground 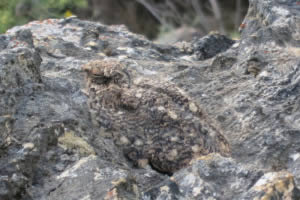 When Olivia was up for sale again in 1988, Holger Rust and his wife Helga decided to invest in a rural property, with the aim to eventually relocate their company headquarter here. The farm was in poor shape, stripped of any grazing value by years of exploitation with sheep, overgrown with invasive flora, (blackwattle, clusterpine, pinus radiata, longleaf wattle, and hakea) dilapidated buildings, and tons of scrap metal. On the positive side there were three points that tipped the scale in favour of going ahead with the deal. Scenic beauty, a selection of mature oak and indigenous trees, as well as a shed that was built in an earth-quake safe fashion with R.C. reinforced ring beam, and that could feasibly be converted into a comfortable home/office building. 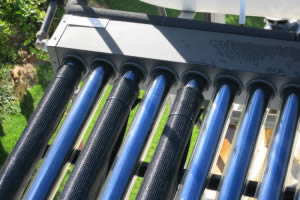 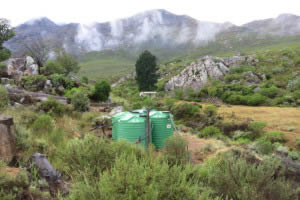 The following 15 years were spent with going through a steep learning curve. Sheep farming was soon abandoned when the creatures started disappearing at night out of a locked shed, faster than the new owners could  breed them. Formidable Nguni cattle were acquired instead and instantly solved that problem. Limited water resources and poor soil conditions, prohibited the establishment of fruit trees or the planting of cash crops. From the word go, there was a team of up to 4 labourers busy with clearing of the alien vegetation. Large trees were ring-barked and left standing, while smaller ones were cut and later burned. A mature Radiata pine plantation was harvested by a contractor and the income helped in financing the endeavour. The scrap was carted away, blissfully at no cost, and the buildings renovated bit-by-bit on weekends. 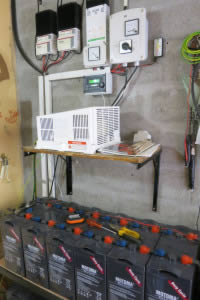 The unreliable water supply position was stabilised over the years by having two boreholes sunk, one equipped with a second hand Climax windmill which delivers good quality water for the household and garden. The other one is equipped with a top brand, state of the art solar pump from Europe, powered by four Sharp 80 Watt solar panels. Unfortunately this pump has proved to be unreliable and service from the local agent was found to be dismal. Water from this source is high in iron and manganese and can only be used for irrigating a small pasture.

A supply line for electric energy was requested from Eskom early in 1989,and soon the farm was connected. A few years later this line would also supply power to two cell-phone base stations and thus boosted Eskom’s income from this line. Renovation of the buildings took a few years to complete.

Finally, in 2003, Helga and Holger were able to move their household and company head offices to Olivia, which is now operated as a private nature reserve. Farming income is provided by rental for a cell-phone tower site, by controlled harvesting of Protea repens, Bruniaceae and Leucadendron rubrum, and lately by a small, free-range egg production enterprise. All organic waste is turned into compost, non-organic waste is sorted on the farm and re-cycled through a private waste sorting company in Ceres.Under the guidance of Johan van Biljon of Intaba Environmental Services, Olivia cooperates with the neighbouring organic wine and olive estate, Waverley Hills in respect of wildlife preservation and the rehabilitation of indigenous flora. 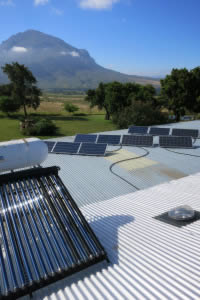 When it became apparent in the  years 2003 to 2005 that the energy supply position was increasingly becoming untenable, the decision to slowly develop the alternative energy resources came easy. A calculation done in 2012 revealed that over a period of 23 years (1998 to 2012) Eskom energy was escalated on average by 38,27% pa. Network charges were escalated by 29,63% pa. on average. During the month of November 2013, which was also the last month of being connected to the net, the cost of electricity was R20,80 per kWh. ( SA average currently is about R1,20 per kWh.)

Meanwhile, the 12 solar panels and 2 small wind turbines with a combined peak performance of 2400 Watt are filling the batteries and  are keeping the building powered up. Cooking is done with gas, with an energy efficient convection/microwave oven and with a wood fired pizza/baking oven. The batteries/inverter have no problem driving 2 energy efficient fridges, a coffee machine, a toaster and electric kettle. All lights have been fitted with LED lights and there is enough power to keep the office on the go. Mowing of the large lawn is undertaken on sunny days to ensure that there is adequate power for the stop-start operation of a 2,2 kw electric mower. Heating of the living room, during winter is taken care of by a very efficient wood burning, closed heater that keeps the temperature at 22 deg.C.

The energy oath; “In production and use, do good – no harm.”

Challenges: Some of the early versions of equipment were found to be less than reliable, as was to be expected. The new generation vacuum tubes are so efficient that the overflow from pressure relief valves is so hot that plastic gutters will deform from the hot water. To counter that problem, every second tube is fitted with a shade-cloth sleeve during the summer months.

Plans ahead: The installation currently produces more energy than can be consumed and any excess is discharged via two heating coils. Ideally, a small electric vehicle (EV) with a 300 km. range would take care of this dilemma. Apart from providing affordable transport, it would act as a standby battery. Pricing for such a solution remains prohibitive, but the owners of Olivia are confident that this will change, just like the prices of solar panels dropped dramatically recently.