SOIL REHABILITATION AND CONSERVATION: A KEY CONCERN FOR THE FUTURE

By Holger Rust, founder and CEO of Terraforce

Natural erosion has always (in terms of human comprehension) occurred under a variety of conditions, but ultimately in a state of balance. Originally the activities of mankind on earth were of little consequence – until as recent as about 10 centuries ago, give or take a few hundred years. Today we number 7 billion, apparently proudly so. 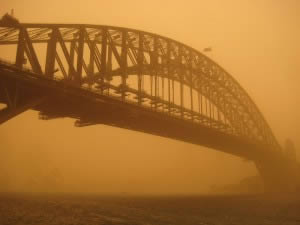 Some scientific studies suggest that that is about 3 billion more than the earth can safely sustain, which in turn indicates that we are possibly not in charge of our own affairs as we should be or as, suffering from delusions of superiority, we claim to be. Already the question of “How to feed the 9 to 10 billion in 2050’s sauna” is doing the rounds. Says Geoff Russell, Australian mathematician and computer programmer: “Cattle and sheep are a major climate change factor, responsible for loss in biodiversity and environmental destruction and  globally irrelevant for food security.”

The effects of our existence on this planet are plainly visible and it has been estimated that South Africa, for example, has lost at least 3 million hectares of productive farm land to soil erosion. A massive dust storm, whipped up on the overgrazed outback of Queensland, Australia in 2009, transferred at its peak at least 75,000 tons of dust (valuable nutrients) per hour into the Pacific ocean. Given the veritable dust storms that are regularly kicked up in parliaments and research institutions about feeding the masses (apart from all the other promises that they need to fulfil and which they might as well forget if they cannot provide enough food), it is astonishing how little attention is paid to implementing sensible corrective measures.

Added to the loss of soil due to bad farming practices, explosive urban development is also contributing negatively. Surface water runoff in urban areas has been found to be ± 4 times higher than in rural areas of similar geographical composition. Impermeable buildings, roadways, parking areas and even storm-water drains may cover ± 20% of the total area. Reduced infiltration, increased runoff velocity and erosion are the direct result. Poor management of the Earth’s drylands are increasing dust storms and changing both the local and global climate, and also impacting local economies

Some “scientists” immediately saw new solutions when it became clear that the dust nutrients in the Pacific led to more fish for the fishing industry. In all seriousness, they proposed deliberate fertilisation to feed the poor, in other words, more of the same – solutions to make corporate wallets grow while the population grows as well – poorer and larger. This type of thinking is very unlikely to affect the quality of life of most life forms on earth, and merely pays lip service to the food security of the poor.

“The grass family is probably the most important plant family for man’s survival and economic prosperity – what would happen if millions of tons of topsoil are lost through accelerated soil erosion, impoverishing the soil resource to such an extent that food production became virtually impossible?” (Frits van Oudtshoorn – Guide to Grasses of South Africa). It seems that in some parts of the world, adequate food production is already not possible. Grasses in general represent the foundation of our existence; every soggy factory chicken (at any one time there are 18 billion of them with an average lifespan of 6 to 8 weeks, most barely able to walk when they reach the end of the road) or every pig that we consume will have been produced mainly with grains (next to other non-virgin substances that they are fed with to enhance growth and keep them “healthy”).

The importance of the most prominent grains that feed mankind – rice, wheat and maize – need not be emphasized here. Grasses also sustain virtually all animals that survive in our parks and nature reserves and that we rely on so much to maintain a basic understanding of nature.  They also represent an important tool to halt the degradation of our soil resources. Healthy savannahs, prairies and steppes represent a largely underestimated carbon sink (storage of soil carbon), provided that they are not over-exploited by grazing animals. It should be noted that frequent burning of these areas, likewise the grazing of residue on worked fields, are practices that do not contribute to the overall health of lands and pastures. Over the long-term, burning destroys the soil. It causes increased soil erosion; it kills beneficial soil organisms and eventually causes lower yields. 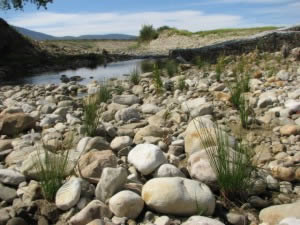 Grasses are relatively easy to establish with seeds or rootstock division, with many companies and departments engaged in this field with much success. Says Johan van Biljon of Waverley Hills Fynbos Nursery: “We are currently engaged in a number of projects to propagate and supply a variety of suitable endemic plants for rehabilitation purposes. To ensure that the genetic characteristics are correct, we collect plant material in the proximity of the proposed rehabilitation site. The plant material collected varies from species to species, seeds or cuttings. All of this happens over a timeframe of around 12 months. It is essential to reintroduce the whole spectrum of plants, meaning that you need to diversify with slow and fast growing plants in harmony with their natural ecological requirements. I believe that the best chance of a successful rehabilitation exists if the evolved natural processes are followed.” 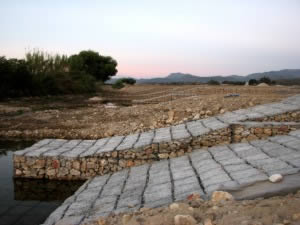 Gabion groynes with concrete panels to protect against abrasion

Briefly, soil stabilisation measures include re-vegetation with suitable plants, hydroseeding, mulching, mixing with straw in sandy soils, windbreaks or brush packing, stabilising cylinders (sausages of biodegradable netting, filled with organic material and seeds), mats made of organic material or logs and hard finishes. Most of these measures work well, depending on various site conditions, but are not a good idea for use on steep slopes or where conditions are not suitable – pure clay embankments, sun-facing hot slopes or slopes that are subject to strong wind, for instance. 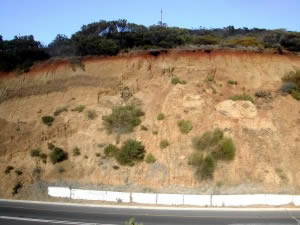 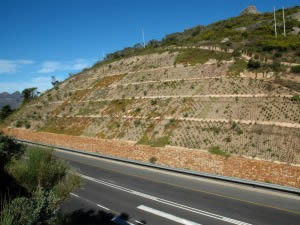 After rehabilitation with concrete measures

Embankments that are steeper than 1 in 1 can effectively be stabilised/retained with interlocking hollow concrete retaining blocks that are plant supportive and easy to maintain. Embankments with an inclination of between 1 in 1 and 1 in 2 can be stabilised with  concrete erosion control/retaining blocks that will not rot or degrade, unlike more cost-effective, soft finishes. 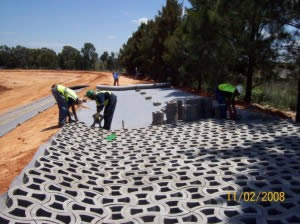 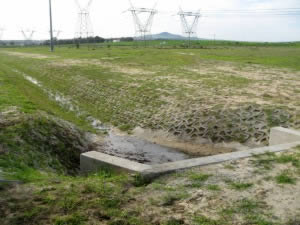 Also, the installation of permeable pavements and the temporary storage of run-off water in detention/attenuation ponds in the upper reaches of the system need to be installed as a matter of routine. Adds Rust as a word of warning, “Ideally this should take place before man-made disasters strike and not after. Ultimately, less (of us) is more, and will be the only solution that can be implemented without triggering hardship and a depressed economy.”