At the Concrete Manufacturers Association (CMA) gala dinner at the Theatre on the Track in Kyalami, Midrand on October 11, Terraforce managed to secure its fifth trophy in the Retaining Wall Elements category for a slope erosion control project at Suikerbossie Nek. The company had previously won the same biannual award in 1998, 2000, 2002 and 2006. 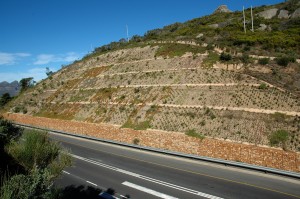 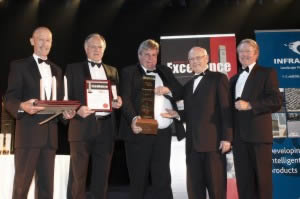 Recieving the Award at the gala evening

The award will be shared with a Suspended Concrete Floor Slab project in Braamfontein (Bridgeview), Johannesburg, which was entered by Echo Prestress; as the judges felt that Suikerbossie Nek and Bridgeview were outstanding projects both of which were worthy of the premier award,  instead of choosing one at the expense of the other the decision was taken to split the honours.

Holger Rust from Terraforce and André Reeders and Neville Moolman from Dassenberg Retaining Systems, the contractors who installed the project, were handed the award by Garth Gregory, president of the CMA and Hans Wiegand, managing director of Cathay Industries SA. Says Rheeder: “We are very happy to be honoured by the industry with this distinction and feel that the quality of the project warranted such reward. It was a challenging project that was solved sensitively to the existing environment.” Terraforce also walked away with two Regional Awards for the Cape, two National Awards and a Special Commendation for a project in Die Kelders Cave just outside of De Kelders in the Walker Bay Nature Reserve, Western Cape, where Terraforce L18 blocks were used to preserve a sensitive dig site. Paul Collins of Cape Wall, the contractor appointed to install the wall, feels that the project was a good example of how government at all tiers, consultants, contractors and local people can collaborate to achieve the preservation of natural heritage with positive results.

Judges’ comments “A project visually sensitive to its context. The anchoring wall and landscape planting was well done.”

The engineers found that erosion and collapsing were caused by the angle of the slope. Although initially stable in terms of wedge or slip circle failure, over time the slope had been rendered unstable through weathering, which reduced its surficial strength parameters. In addition, non-functional surface cut-off drains, situated above the cut face, had accelerated erosion and slip failure. Moreover, a lack of regular maintenance had led to silting and vegetation growth in the drain, resulting in choking with consequential over-topping.

Duncan Murphy, a civil engineer at Jeffares & Green, outlined the nature of the failure: “At some point erosion activity would have intersected the cut-off drain, and the formation of a large eroded gully in the cut face would have been the likely outcome. This could have resulted in the formation of a deep and irreparable gully extending a considerable way up the slope. Moreover, judging by the crack pattern in the head-scarp, a significant collapse onto the road during a period of high rainfall was imminent.”

Remedial options such as gunite and soil nails or an 8,5m vertical concrete retaining wall were discarded for aesthetic reasons. Instead a combination of a near vertical gabion toe wall up to 2,5m high, a 35º Terrafix-covered slope topped with a concrete-lined cut-off drain, and Terraforce L12 side walls, was the option selected. Terrafix 150 blocks were laid to trap the maximum amount of topsoil on the face, a solution which has prevented erosion and weathering and encouraged plant growth.

Because the slope was large and curved, near-horizontal concrete infill walers were used at five metre intervals to fill the uneven spaces between adjacent panels. These were secured with anchor bars so that any possible pressure on the gabion wall would be reduced, and Terrafix’s maximum laying density of 10 blocks per square metre was used to prevent lateral sliding.

Thousands of waterwise indigenous plants, ground cover and bulbous species were planted and these have started to relieve the nondescript appearance of the slope.