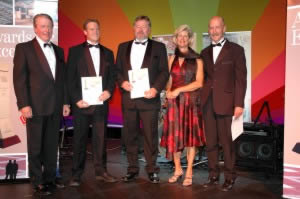 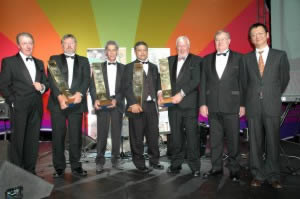 Jeremy Leighton receiving the Premier Award on behalf of Decorton

The Inland Regional, the National and the Cathay Pigments Trophy-winning project teams in this year’s Awards for Excellence competition were announced during the black tie gala banquet, attended by over 450 guests.

Attending the function were CMA companies, the judges and the media. The MC for the evening was well known comedian David Kau and the awards were presented by Garth Gregory, president of the CMA and Terrence Yu, chairman of Cathay Pigments SA.

The Trophy awards are made to project teams for the most outstanding submission in each of four product groupings: Concrete Block Paving, Concrete Masonry, and Concrete Roof Tiles. The best project from the three remaining entry groups – Infrastructural Products and Innovative Products, Concrete Retaining Block Walls, and Suspended Concrete Floor Slabs – is selected by the judges for the fourth trophy award. 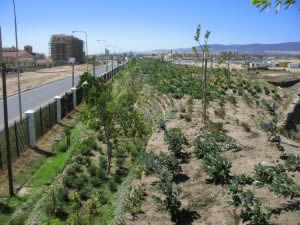 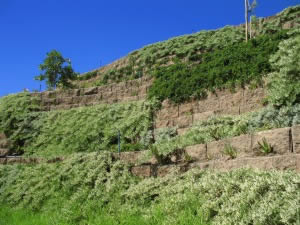 This year that trophy went to Terraforce cc, Cape Town-based and international licensor of erosion control and retaining wall blocks and their Western Cape manufacturer, Klapmuts Concrete (Pty) Ltd, with the judges recognising the “innovative and ecological” style in which the Terraforce L12 rockface blocks were applied in a highway noise barrier installation at a new development in the Western Cape.

This new development within the Century City complex in Cape Town is located next to a busy thoroughfare. To protect residents from noise and ensure their privacy, a six metre high, 500m long earth berm was created with surplus site material.

The noise barrier, designed by Planning Partners (Pty) Ltd, Cape Town-based landscape architects, was constructed using Terraforce L12 rock face blocks placed on a concrete foundation for each terrace. A subsoil drainage system is located behind the bottom row of blocks and the earth backfill is reinforced with Polytex 115 geofabric on every third row of blocks.

To further improve noise absorption, an embankment with three terraces, each with a maximum height of 1.8m and varying widths, was built on the road-facing side. Hardy plant varieties were introduced to prevent wind erosion on the sloping embankments facing the buildings.

Says Rust from Terraforce: “These hardy plants are fast growers and adapted to dry spells and high winds that can occur in this part of South Africa. They will also be very effective in preventing wind erosion on the sloping embankments, facing the buildings.” 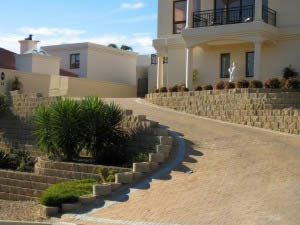 Little or no irrigation and minimal maintenance

Little or no irrigation and minimal maintenance

Another interesting project, a private home in the Western Cape, also won regional and national awards for that region. Situated in Welgedacht, this house required a landscaped desert image requiring little or no irrigation and minimal maintenance. To achieve this goal, embankments above and below the paved driveway were stabilised with Terraforce L11 rock face blocks in a rustic sandstone colour.

Two separate terraces were incorporated to accommodate feature plants while behind the house another rock face wall was built to provide additional space around the kitchen and pool area. The judges felt that this stylishly landscaped retaining wall complemented the overall architectural form of the house in a very effective manner. 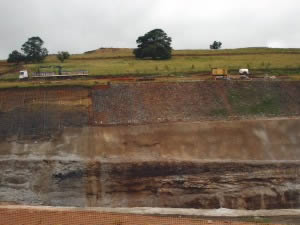 The third regional award, this time for an inland project, was won by ReMaCon Products cc, another Terraforce licensee. In this case, some 270 000 m³ of soil and rock had to be removed at Forzando Coal Mine’s underground entrance to form South Africa’s second largest incline box cut operation. More than 2 200 m² of Terrafix 120 blocks, manufactured by ReMaCon, were required.

Stabilisation of the earth and protection against water erosion was effected by using the blocks, which are quick and easy to place using unskilled labour. They were packed in the densest pattern of 10 blocks per square metre and heavy rains of over 1 000mm between January and March 2006 had no effect on the protected slopes.

Overall, Terraforce has managed, in the past 8 years, to win a Premier Award on four occasions, and has never failed to leave the bi-annual awards function with national and regional awards.

“I am again very proud of the input by the relevant manufacturers and contractors that make these projects possible,” said Rust, “and I am sure that the future holds a promise of even more interesting and innovative developments for Terraforce products.”